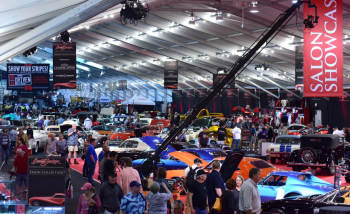 Watch All The Action on Velocity Beginning at 1 p.m. MST and During a Special Six-Hour Simulcast on Discovery Channel and Velocity From 4-10 p.m. MST Saturday, Jan. 20

SCOTTSDALE, Ariz. – Jan. 16, 2018 – The Barrett-Jackson Scottsdale auction is poised for a historic “Super Saturday” this weekend as some of the most high-profile vehicles are scheduled to cross the auction block. Viewers at home can catch all of the heart-pounding action beginning at 1:00 p.m. MST on Velocity, and then during a special, unprecedented six-hour simulcast on Discovery Channel and Velocity from 4:00 p.m. – 10:00 p.m. MST.

“We are off to a spectacular start this week at our 47th Annual Scottsdale Auction with a record opening weekend and, with more than 1,700 cars on the docket, we are building up all week to a ‘Super Saturday’ that is going to absolutely rock the house,” said Craig Jackson, chairman and CEO of Barrett-Jackson. “For the first time ever, Discovery Channel will broadcast live on Wednesday in prime time, and Saturday’s simulcast will bring a historic day to viewers at home on Discovery Channel and Velocity.”

Among the highlight vehicles included in Saturday’s simulcast are four high-profile charity vehicles:

“We have a spectacular docket this week, and our charity cars are just a small sample of the incredible cars that will cross the block on Saturday,” said Steve Davis, president of Barrett-Jackson. “We are excited to sell the newly unveiled 2019 Ford Mustang Bullitt (Lot #3006) for charity on Friday, which will lead us into one of our best ‘Super Saturdays’ ever on the auction block.”

Also on the docket for Saturday is a 1951 Talbot Lago T-26 Grand Sport Saoutchik Coupe (Lot #1381), 1952 Ferrari 212 Europa (Lot #1378) and 21 vehicles from the Steve Todhunter Collection that include some of the most sought-after supercars in the world today.

Tweet
Published in Latest News From Bumper to Bumper Radio
More in this category: « Diesels "Pickup" New Life in Detroit January Gas Price Trends Indicate a More Expensive Year at the Pump »
back to top