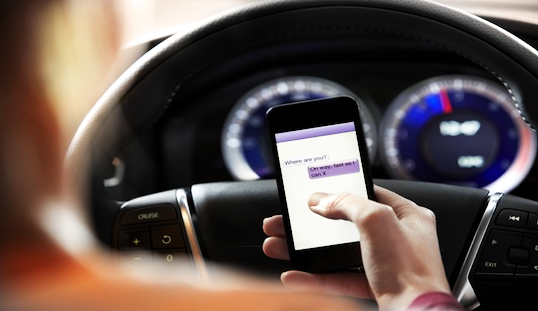 Irvine, Calif., Oct. 20, 2015 -- Even though 46 states have laws in place banning texting and driving, and 14 states ban the use of talking on a cell phone while driving[1], 97 percent of consumers say that distracted drivers who text or talk and drive are one of the biggest safety concerns impacting today's motorists, according to an all-new survey by Kelley Blue Book www.kbb.com, the only vehicle valuation and information source trusted and relied upon by both consumers and the automotive industry.  Of those surveyed, 91 percent are aware of current local laws pertaining to texting while driving.  In addition, approximately 81 percent of respondents believe Millennials between the ages of 19-34 text most often of all age groups while driving.

"Mobile phone technology offers enhanced convenience and connectivity for consumers, but it is increasingly a source of distraction on the road," said Arthur Henry, senior manager of Strategic Insights for Kelley Blue Book.  "In fact, consumers believe drivers who use cell phones are a more significant safety concern than drunk drivers, road rage or weather conditions."

"According to Kelley Blue Book's latest survey, almost half of consumers send text messages while driving because they feel it can't wait," said Rebecca Lindland, senior director of Commercial Insights for Kelley Blue Book. "In order to combat this issue, friends, family and colleagues need to develop situational awareness and avoid texting someone when we know they are driving in an effort to keep them and other drivers out of harm's way. Your text can wait."

Kelley Blue Book fielded this survey from October 8-12, 2015, and the survey had 1,281 respondents.  Surveys were completed by members of Kelley Blue Book's Blue Ribbon Panel, an exclusive online community for vehicle owners and shoppers who are invited to share opinions that provide valuable and timely insights.

To discuss this topic, or any other automotive-related information, with a Kelley Blue Book analyst on-camera via the company's on-site studio, please contact a member of the Public Relations team to book an interview.

Tweet
Published in Latest News From Bumper to Bumper Radio
More in this category: « Distracted Driving Trends: Use of Hand-Held Cell Phones for Talking Decreasing, Increasing for Internet and Social Media Teens were asked what would stop them from texting while driving... »
back to top