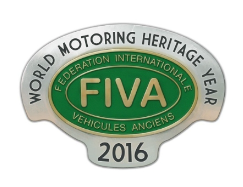 BRUSSELS, Jan. 28, 2016 -- FIVA, the international federation of historic vehicles, has named 2016 as World Motoring Heritage Year – both in recognition of our motoring history, and to celebrate a new dawn for the historic vehicle movement throughout the world. This year also marks the 50th anniversary of FIVA, the Fédération Internationale des Véhicules Anciens.

"This is the perfect time to launch World Motoring Heritage Year, as we're moving towards a bright new age of classic motoring," says Patrick Rollet, President of FIVA, which is a non-profit-making enterprise, set up in 1966, and currently representing 85 member organizations in more than 64 countries, on behalf of millions of individuals with a passion for historic cars, motorcycles or utilitarian vehicles.

"At a time when new technology and autonomous cars are poised to change the face of motoring forever, you only need look at the similarly dramatic shift in transport at the end of the 19th Century – when horses were almost entirely replaced by motor vehicles – to see a vibrant future for classic cars as recreational vehicles. Indeed, there are some startling parallels between the environmental crisis of the 1800s, and the challenges facing the motor industry today [see footnote on 'Environmental crisis, then and now'].

"And it is right to celebrate motoring history. The automobile has – over the last hundred years or so – had a hugely liberating effect on humanity. FIVA welcomes safer, cheaper, more environmentally friendly modern vehicles as necessary transport, but as autonomous cars become the norm on arterial roads, the back roads will increasingly be available for people to enjoy classic motoring."

To mark World Motoring Heritage Year and emphasize its new mission statement, 'Protecting, preserving and promoting world motoring heritage', FIVA is planning an ongoing series of events and initiatives throughout the coming year, including:

"Now is the ideal time to celebrate the freedom, pleasure and technological advances that our motoring heritage has brought us," concludes Patrick Rollet.

FIVA is the only global organization of its kind aiming to encourage the safe use on the roads of self-propelled, mechanical vehicles more than 30 years old, but equally focused on preserving and promoting the very culture of motoring.

Footnote: Environmental crisis, then and now:

Tweet
Published in Latest News From Bumper to Bumper Radio
More in this category: « "Love Drives Me" Awareness Campaign Combines Love, Safety and Support for Local Program Distracted Driving Trends: Use of Hand-Held Cell Phones for Talking Decreasing, Increasing for Internet and Social Media »
back to top