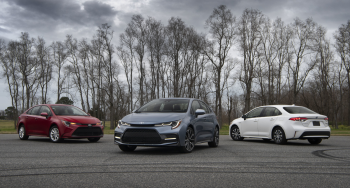 SAVANNAH, Ga., Feb. 26, 2019 -- With more than 46 million Toyota Corollas sold globally since its introduction in 1966, it would be difficult to find a driver who did not recognize the name. Everyone, it seems, has a Corolla story. Many, though, are going to be doing double takes when they see the re-imagined and reconfigured 2020 Toyota Corolla sedan. And that's exactly the point.

The 12th-generation Toyota Corolla made its arrival in three chapters: the all-new Corolla hatchback arrived last summer, and then came the current best-selling Corolla body style, the sedan, in two waves – a reveal of the new gas model in Carmel and then the introduction of the U.S.' first Corolla Hybrid at the Los Angeles Auto Show. All three are based on the Toyota New Global Architecture (TNGA), which is far more than a new body structure, bringing together new approaches to engineering, design, assembly, and materials. Now, there really is a Corolla for everyone.

TNGA transforms Corolla styles into drivers' delights while also bolstering the model's renowned value and reliability. They draw from the same DNA. It's no surprise, then, that the 2020 Corolla sedan dramatically elevates this model's focus on comfort and refinement while also infusing it with the Corolla hatchback's feisty personality.

The Corolla sedan's bold new look is a perfect reflection of the bumper-to-bumper, wheels-to-roof transformation that has taken place. The TNGA platform means an available engine that produces more power than its predecessor yet delivers better fuel efficiency. TNGA imbues the Corolla sedan with greater agility, yet also with its smoothest, quietest ride. TNGA also means an elevated feeling of quality in every surface, switch and control the driver sees and touches. And, critically, TNGA delivers on Toyota's commitment to driver and passenger safety with the Toyota Safety Sense 2.0 suite of active safety systems – standard on every Corolla sedan model.

Efficiency No Matter the Grade

The Corolla Hybrid, which has the lowest purchase price of any hybrid in the Toyota lineup, has the second-highest mpg estimate of any vehicle in that same lineup.

About Toyota
Toyota (NYSE: TM) has been a part of the cultural fabric in the U.S. and North America for more than 60 years, and is committed to advancing sustainable, next-generation mobility through our Toyota and Lexus brands. During that time, Toyota has created a tremendous value chain as our teams have contributed to world-class design, engineering, and assembly of more than 38 million cars and trucks in North America, where we operate 14 manufacturing plants (10 in the U.S.) and directly employ more than 47,000 people (more than 37,000 in the U.S.). Our 1,800 North American dealerships (nearly 1,500 in the U.S.) sold 2.8 million cars and trucks (2.4 million in the U.S.) in 2018 – and about 87 percent of all Toyota vehicles sold over the past 16 years are still on the road today.

Through the Start Your Impossible campaign, Toyota highlights the way it partners with community, civic, academic and governmental organizations to address our society's most pressing mobility challenges. We believe that when people are free to move, anything is possible. For more information about Toyota, visit www.toyotanewsroom.com.

Tweet
Published in Latest News From Bumper to Bumper Radio
More in this category: « GoodGuys 10th Spring Nationals | March 15-17, 2019 | WestWorld of Scottsdale Think You’re In Your Car More? You’re Right. Americans Spend 70 Billion Hours Behind the Wheel »
back to top