Gas Prices Fluctuate Across the Country 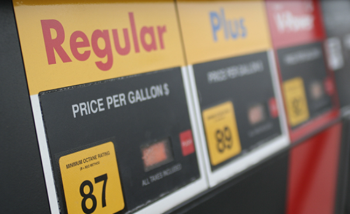 At $2.33, the national gas price average is two cents cheaper than a week ago. Consumers in most Midwest, East Coast and Southern states are paying, on average, two cents less on the week, while most West Coast and Rockies states are seeing pump prices increase on average by three cents. Today’s national average is five cents more than a month ago and 17 cents more expensive than a year ago.

West Coast
With the exception of Hawaii, all states in the region are selling gas that is more expensive on the week: Oregon (+10 cents), Washington (+5 cents), Nevada (+2 cents), Alaska (+1 cent), California (+1 cent) and Arizona (+1 cent). Hawaii’s gas price dropped by one cent in the last week. The country’s first total solar eclipse, happening today, is the driver behind Oregon’s double-digit increase. The state is seeing an influx of visitors to witness the event.

Despite a small 100,000 bbl build on the week, West Coast gasoline inventories are 3.6 million bbl lower than this time last year. For the third consecutive week, the region’s total inventory registers under 27 million bbl, the second lowest inventory levels of all regions. However, the West Coast continues to lead the country with the most expensive gas prices.

Rockies
Gas prices continue to increase for the bulk of states in the Rockies as the region’s gasoline inventory levels hit a yearly low of 6.3 million bbl. Consumers in four states are paying more on the week: Idaho (+7 cents), Utah (+5 cents), Montana (+1 cent) and Wyoming (+1 cent), while Coloradoans are paying one cent less.

Great Lakes and Central States
Six Great Lakes and Central states saw the country’s largest decrease in gas prices on the week: Indiana (-10 cents), Ohio (-9 cents), Michigan (-8 cents), Illinois (-5 cents), Kansas (-4 cents) and Nebraska (-4 cents). As prices at the pump drop, so does the region’s gasoline inventory. According to the latest EIA report, the region drew one million bbl of gasoline on the week, the largest of any region in the country. Typically, gas prices increase with growing demand; however, the region often sees high volatility, which impacts gas price trends week by week.

Two refineries saw activity that halted production in the last week. ExxonMobil’s 584,000-b/d Baytown, Texas, refinery was forced to shut a hydrocracker unit a day after restarting, following the end of a two-month turnaround. The latest update on Friday was that the unit was still undergoing maintenance. Additionally, Shell’s 340,000-b/d Deer Park, Texas, refinery is expected to be shut down for at least a week following a fire. The issues had an immediate impact on market spot prices, but not prices at the pump.

Gas prices are cheaper in all states in the Mid-Atlantic and Northeast on the week with the exception of New York where gas prices remained stable. With a three-cent decrease, New Jersey is seeing the largest decline in the region followed by two-cent decreases in Delaware, Maryland, North Carolina and West Virginia.

The price drop goes hand-in-hand with the region’s latest gasoline inventory trend. For a second consecutive week, the region saw the sizeable build (800,000 bbl) in gasoline inventory. Total inventories sit at 64.8 million bbl, about five million less than this time last year, according to EIA data.

Oil market dynamics
At the end of last week, the price per barrel of West Texas Intermediate stayed below $50 – settling at $48.51. On Monday morning, prices appeared to be falling due to a weak dollar and continued worries about high crude oil inventory levels.
According to the EIA report for the week ending on August 11, gasoline production moved higher to 10.2 million b/d. With greater demand for refined products like gasoline, crude inventories decreased by 8.9 million bbl – a much larger than expected drawdown. Additionally, Baker Hughes, Inc. reported that active oil rigs in the U.S. fell by five last week, landing at 763. The movement of these key figures show that August is setting a strong scene for crude oil supplies to become tighter as demand continues full steam ahead with the summer driving season coming closer to its end.

On the flip side, U.S. crude output climbed 79,000 b/d to 9.502 million b/d – which is the highest level seen in two years. The greatest portion of the increase came from Alaska, but production in the continental U.S. (driven by shale activity) moved higher to 25,000 b/d. This continued growth in U.S. production continues to add to the global glut of crude, putting downward pressure on crude prices. As a result, market observers will look toward this week’s EIA report to see if the trend continues, noting that gasoline demand along the path of today’s solar eclipse may help boost numbers. Drivers in the viewing pathway may see prices spike due to high demand.

Tweet
Published in Latest News From Bumper to Bumper Radio
More in this category: « Older, Not Wiser: New Study Reveals Teens Become Riskier Drivers As They Enter Senior Year Can These Cars Be Saved? »
back to top