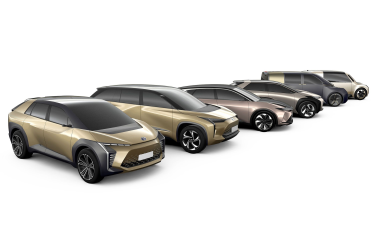 Electrified vehicles including BEVs will make up 70% of U.S. sales by 2030

Global sales of approximately 8M electrified vehicles by 2030 of which 2M will be BEVs and FCEVs.

PLANO, Texas, May 12, 2021 -- Toyota is on the path to an electrified future and the company is committed to making battery electric vehicles (BEVs) a key part of its lineup. Earlier this year, Lexus unveiled the LF-Z, a conceptual look at the future of BEVs in the luxury segment. That was followed by the debut of the Toyota bZ4X concept, a battery electric SUV that will go into production in 2022.

"For over 30 years, Toyota has been innovating and investing in technology to reduce vehicle emissions and achieve carbon reductions," said Chris Reynolds, chief administrative officer, Toyota Motor North America. "And, although some people believe concentrating resources on one possible solution will achieve the goal more quickly, we believe investing in many different solutions will actually be a faster way to achieve carbon neutrality around the world."

Toyota has led the way with more electrified vehicles on the road than all automakers combined. It started in 1997 when Toyota introduced the first generation all-electric RAV4-EV, followed by the now iconic, Prius, a gasoline-electric hybrid. In 2015, Toyota launched its first emissions-free, FCEV, the Mirai.

Since then, Toyota has adapted hybrid electric powertrains to vehicles of all shapes and sizes. There are now 17 electrified vehicles in the company's U.S. lineup, including HEVs, PHEVs, and FCEV, with more on the way.

Over the years, Toyota hybrid models have saved 139 million tons of greenhouse-gas emissions worldwide--76 million tons in the U.S. It is clear, the environmental impact of HEVs, PHEVs and FCEVs has been profound.

At Toyota, we believe giving consumers choices with a portfolio of alternative powertrains can help bridge to an all-electric mobility future. The company's approach seeks steady and substantial carbon reductions every year until the recharging infrastructure and costs of BEVs make them an attractive, affordable choice for all consumers everywhere.

Toyota is committed to help solving BEV infrastructure and cost challenges while delivering mobility that best fits the many needs of consumers. We also encourage policymakers to write regulations and laws that encourage consumers to consider all kinds of environmentally friendly, carbon-reducing vehicles so we can move even faster toward a carbon neutral society for all.

Toyota (NYSE:TM) has been a part of the cultural fabric in the U.S. for more than 60 years, and is committed to advancing sustainable, next-generation mobility through our Toyota and Lexus brands, plus our nearly 1,500 dealerships.

Toyota has created a tremendous value chain and directly employs more than 36,000 in the U.S. The company has contributed world-class design, engineering, and assembly of more than 30 million cars and trucks at our 9 manufacturing plants, 10 including our joint venture in Alabama that begins production in 2021.

Tweet
Published in Latest News From Bumper to Bumper Radio
More in this category: « Memorial Day Holiday Travel to Rebound to More Than 37 Million Memorial Day Travelers will Pay Highest Gas Prices since 2014 »
back to top

Bumper to Bumper answers a listener's question about cracking windshield trim on her 2005 Ford Escape.