Representing the best in family operated auto repair shops in Phoenix, Shadow Mountain Auto Service is a facility that is profoundly centered on making sure that their customers receive the best auto repair in Phoenix.

The fact that Shadow Mountain Auto Service is not corporately owned, they are able to more effectively turn their attention to their customers.

Curt started Shadow Mountain Auto Service in 2008, with the motto "Character Counts" with the intention of founding the most ethical, customer oriented automotive repair facility in the valley. Curt is a crusader for honesty and ethical conduct in the industry. He is most proud, not of the technical achievements in his business, but of the relationships built with people through the business.

Curt will tell you that, after 20 years, he has the best marriage of anybody he knows. He has lived with Cindy in the same house for almost 20 years, and has put up with one or more big, slobbery dogs for all that time just to keep Cindy happy. Or so he says. 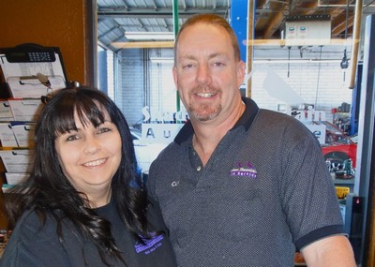 In more than 30 years of working on cars and being in the automotive business Curt has amassed an impressive resume in many different areas. Curt is double Master ASE certified with advanced level certifications in both automotive and diesel applications, something only a very small percentage (less than 1%) achieve. He is one of the first technicians in Arizona to achieve the advanced level engine performance certification nearly twenty years ago.

Curt can often be heard on the radio doing the Bumper to Bumper show on KTAR or the Auto Repair Arizona on KFNX show. Curt teaches college level courses in many automotive subjects, including advanced drivability and electrical classes. Curt has been an active member of the NATEF educational standards advisory committee at Glendale Community College and is the current serving Chairman of that committee. Curt has been a member of the Better Business Bureau since starting his business and was invited to join the Automotive Repair Advisory Council of the BBB in 2012, being elected Chairman of the council for 2015-2017.

Owner of Shadow Mountain Auto Service and Curt's wife. Cars and animals have always been her passion so owning an automotive business was a dream she and Curt talked about for years. Prior to coming to the shop full time in 2011, Cindy managed an animal hospital for 10 years and before that worked for 11 years in marketing and advertising at Channel 3. As Curt mentioned, they have been in the same house for many years where they raised their two daughters"¦ now they have a South African Boerboel named "Diesel" who keeps them entertained and being over 180 pounds you can't miss him. When not at the shop, Cindy enjoys trips to the dunes to ride her quad and on the weekends it's a mix of NASCAR, UFC and the NFL GO CARDINALS!!

Steve is our General Service Technician and is the go to guy at the shop for so many tasks. He has been with us for 5 years and is a native to Arizona. He has a fabulous wife Kelley and four kids who keep them busy. He also recently became a grandpa to little Jayden. In 2015 he graduated from the University of Phoenix with a degree in Entrepreneurship and Business. Steve enjoys camping with his family and is very involved in his church.

Randy is our Shop Manager/Service Writer and is here for you to make your experience the best possible. He was born and raised in Huntington Beach, California and is an avid car enthusiast especially Hondas (from cars to motorcycles). He speaks 3 languages (English, Italian and German) and enjoys tutoring German on the side. He enjoys his Asian food, especially sushi. Randy loves random road trips to nowhere and wow does he take amazing photos on these trips! He has an international racing license and has completed multiple advanced driving classes in Europe.

Ron, as a Service Writer is here to make your experience the best possible. Ron has developed a ton of knowledge and experience in his more than 30 years in the automotive world. He was born in Rochester, Minnesota into a family of farmers. Ron is an only child and credits his exemplary work ethics that he has today to the hard life of a farmer. It was in Minneapolis where Ron took his first job as a Service Writer at Harold's Chevrolet. Since then he has held many tittles throughout his career and has many certificates of completed service related courses. Ron has a beautiful wife Nora and has three grandchildren. His interests include riding ATV's, camping, fishing and spending time with family.

Jeff is our lead Technician and has more than 25 years in this field. He is one of the most dedicated to quality Technicians we have ever seen, and he truly knows how to get the job done right. Jeff builds beautiful show and race cars and his ability and craftsmanship is amazing. Jeff and his family enjoy local car shows and often go on classic car cruises around the state with others. They also enjoy going to the sand dunes"¦ I think he is a bit of an adrenalin junkie!!

Luis is a Technician and has more than 14 years of experience. Talk about someone who has an amazing attitude and outlook on life, he is always smiling. He was born and raised in Puerto Rico and moved to Arizona in 1999. Luis and his wife enjoy taking road trips and spending time with family. They have Children and Grandkids. Luis also enjoys movies, sushi and an occasional doughnut.