Curt’s Auto Repair, Phoenix Arizona has been known for delivering quality Vehicle repair since 1987. Although young by some people’s standards, it is not uncommon to hear tales of their superior workmanship and customer service. This stems from their high profile code of ethics, making such statements as "showing Personal Obligation to each customer" is what wins the heart of any individual who requires their services.

When it comes to choosing a repair shop, everyone wants a mechanic that consistently performs quality labor at a reasonable price. Superior customer service and a personal interest in the well being of your vehicle can come as an added bonus. Curt’s Auto Repair brings the entire package by treating you with professionalism and dignity, no matter how small the repair, from the first time you call them. Many of us who have had experience with multiple shops know that finding a good maintenance shop is like finding a needle in a haystack. Though you may not recognize it at a glance, you will certainly feel the difference! For my money, its things like keeping you up to date on the repair process by contacting you if the timeframe changes and using only parts which meet or exceed factory recommendations which set Curt’s Auto Repair apart from the rest.

What People Are Saying About Curt’s Auto Repair 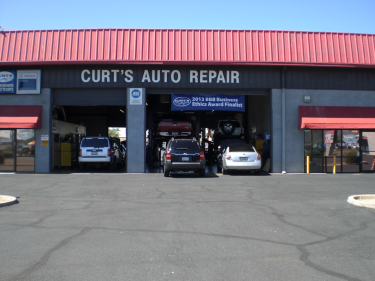 "What an amazing family owned Company!! I found them after a bad experience with a dealership when my car needed service. When I arrived, I was greeted by my name. Within a few minutes, they had my car in the back and came to me with the repairs they felt were needed. They were honest and reasonable about the repairs and showed me on the car what they were going to repair. I had planned to take a cab home since it would take a while, but to my amazement, I was offered a ride home. Now granted I only live a few miles up the road but this was totally jaw dropping to me. I know a little bit about cars, but HATE when I need repairs because all too often the service reps will see a Woman and gouge, bully and inflate the cost and repairs, this is not the case with Curt's. Today, the owner's Wife, Kathy dropped off a delicious danish with a Thank You attached.Curt's is just an Amazing LOCAL FAMILY OWNED Company.. THANK YOU!! Keep up the awesome job."
- Lisa C

"Amazing, honest mechanics. I wouldn't use anyone else."
- Steven S

"This is a fantastic business. They were honest, friendly and professional. I have recommended Curt's to everyone I know."
- Anon

"Awesome customer service. Kept my car longer than promised BUT price didn't change and it runs like a dream!! They corrected many of my previous mechanics errors and I was treated with respect!"
- John P

"We've used Curt's on several occasions for both of our vehicles. This time for a pesky 'O/D Off' light. They tracked down the parts for an 11 year old vehicle and had the work done in one day. The first time we used Curt's it was to repair my drivers seat. The electronics had died and it was stuck in one position. When the replacement seat was not available (which would have cost over $700), they found a used seat and replaced it for $250. WOW! I was really amazed...They are family owned and open on Saturdays. Such a fantastic group of folks, very friendly and helpful. I HIGHLY recommend them."
- Lance B

"Very friendly and they care about you as a person which is odd but good for a car repair shop. Will continue to use them."
- Samantha W

"I brought my 2006 Honda in to get my trunk lock replaced and to have them look at the under belly of the car. My wife had run over a tire on the freeway and I wanted to make sure there was no damage. Curt’s took care of my request to my satisfaction. They too $20 off the bill because I had an Angie’s List coupon. Everyone was really cordial and professional. On my way to pick up the 2006 Honda, my 1997 Honda began overheating and many of the warning lights came on just as I was pulling in to Curtis'. The mechanic came out and diagnosed the problem as a badly leaking hose. They kept the 97 Honda overnight and found out I needed 3 hoses replaced. I got the work done and the car seems to be working just fine. I think Curtis is an honest and professional auto repair shop and I would definitely use them in the future."
- Edmond O

"Excellent service, repair was unscheduled but they completed the same day even though they were busy. Cost was reasonable and they were extremely professional"
- Brian N

"I called a few shops to price out new brakes for my Porsche Cayenne because the dealership was going to be very expensive. Ethan called me back immediately with pricing that made sense. One of the shops gave me a range of prices, which wasn't very helpful. I made an appointment and Curt's called the day prior to confirm. They were friendly when I dropped my vehicle off and picked it up. I just received a personal thank you for my business last week. Great price, great job & great costumer service. They're a keeper."
- Keith G

"Curt's did a full engine analysis including fuel injector performance and could not find anything wrong that would cause lowered fuel economy. When I dropped off my GMC 2500HD truck they offered me a ride home. Turned out it was Curt's turn to provide the transportation and we talked about diesel trucks and performance the whole way back home. They are organized, always on schedule and friendly."
- Michael S

"We have used Curt's for various jobs in the past. I have only reported on the most recent one. However, they have done brake jobs, door repairs, and taken care of other auto issues with satisfaction."
- Diana D

"His suggestion of an alternate way of doing the repair without compromise in quality saved me $250. No one else did. Small but top-notch outfit."
- Michael K

"In addition to the service was an inspection to evaluate the engine mounts. During a prior service at another provider we were told all 4 mounts needed to be replaced, an expensive repair. I discussed with Benjamin in the repairs recommended and obtained a quote. Upon the completion of the inspection it was determined the replacement of the mounts was not needed at this time. I am very glad I sought a second opinion and feel we received hones and reliable information. Benjamin was very professional, courteous and accommodating towards our schedule, in addition my daughter received a very nice follow up contact from Kathy."
- Patricia M

"I have nothing bad to say. The customer service was superior and the prices were more than fair. I will note however, that the car being worked on was a friend of mine. She has been ripped off by several mechanics in the past, so I found Curt's on Angie's List for her and delivered and picked the car up personally."
- Kevin S

"They were great on the phone and even better in person. My wife feels really comfortable talking to them."
- Daid D

"I took my Camry for replacing the engine coolant motor. They gave a price quote that was about $150 less than the authorized service center quote and performed the job on time and the car has been running fine since. Pretty happy with their service."
- Naveen C

"I arrived at Curt's without an appointment. They said they would get me in that day. I wasn't sure what was wrong with my 2004 Honda Accord, so I asked for them to determine why my car was not running smoothly. I also needed an oil change and found they would do that for me too as well as addressing a non-function automatic door lock on the drivers side. Curt's staff thought it would likely be a few hours for them to work me in and provided a ride home while the problems were diagnosed. They called to let know that my problem was motor mounts and asked if I wanted them to proceed. They provided an estimate for all of the work I needed and I agreed to have the work done. Because of needed parts, they requested to keep the car overnight. They next day, by early afternoon, all work was completed including a test drive to be sure the car was running well. I was especially pleased to have the door lock on my drivers side replaced. I feel safer now. My car is running well. I will return to Curt's."
- Judy W

"I have been having slow star/no start problems with the diesel engine. I had a dealership give it a go and after a day in their shop where they replaced 2 crack sensors and a battery, the truck was still ailing. I phoned Curt's after reading Angie's List reviews and spoke to Jeff. He was very knowledgeable about the various problems that could result in the symptoms I described. He explained that they would have to diagnose the problem first and quoted a price for that service; I accepted. The drive is over 30 miles from my house, but the results and the experience were well worth it. They replaced a bad started and solved a faulty turn indicator problem for about the same money that an OEM started (just the part) would have cost me at the Dodge dealership. I am very happy with Curt's and will use them in the future."
- Patrick K

"This was our first time using Curt's Auto Repair. We chose Curt's because of all of the positive reviews, and we were not sorry. We worked the Jeff, who kept us informed and up to date with what was happening with our vehicle. The cost was under the estimate. Jeff did all he could to keep the price down. Also, they took our car to Custom Car Concepts to have the radio/cd player installed. On top of that, they even went out of their way to deliver the car to our home because we were unable to pick it up for a few days. Our future car repairs and recommendations to others will be going to Curt's Auto Repair."
- Arthur H