(WASHINGTON, June 8, 2015) The national average price for regular unleaded gasoline has remained steady over the past week and continues to hover near at what many expect to be the highest average of the year. Today’s price of $2.75 per gallon is fractions of a penny higher than a week ago and is nine cents per gallon higher than one month ago. While pump prices across the country have increased since April, consumers are saving 90 cents per gallon compared to this same date last year. 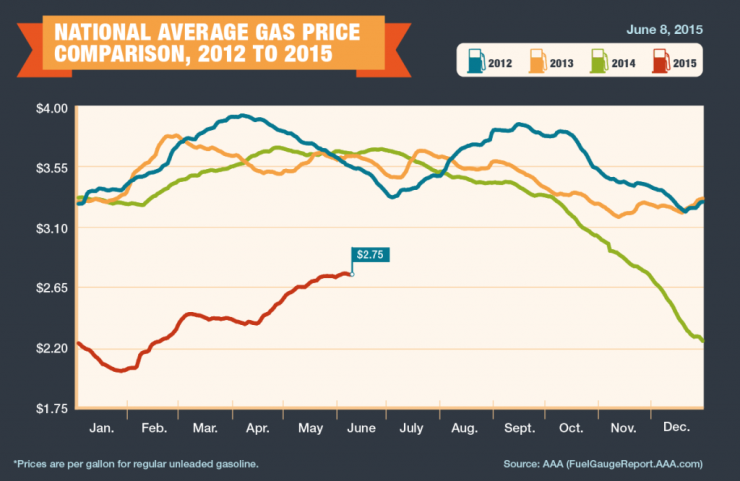 Gas prices likely are poised for a seasonal decline given that refineries generally complete maintenance by this time of year and gear up production for the busy summer driving season. In addition, the cost of crude oil is unlikely to rise significantly in the near term given that OPEC decided not to cut production at its most recent meeting. Nevertheless, a number of factors could cause prices to inch higher during the summer driving season, such as geopolitical issues in the Middle East, unexpected problems at major refineries or a major hurricane that disrupts production, refining and distribution.

Pump prices in the Midwest recently surged due to a series of a refinery issues in the region that have limited production. According to the U.S. Energy Information Administration, gasoline production in the Midwest during the most recent week fell to its lowest levels since late March. Meanwhile, prices on the West Coast are stabilizing due to a surge in imports that have helped to offset supply issues stemming from refinery problems.

Week-over-week prices have been relatively stable, moving just +/- 3 cents in more than half of the states (31). Consumers in 37 states and Washington, D.C. are paying more at the pump versus one week ago, with averages in eight states reflecting increases of a nickel or more per gallon. The largest increases in price over this period were in Minnesota (+8 cents), Alaska (+7 cents) and Montana (+7 cents). Prices moved lower in 13 states versus one week ago, and the largest savings in the price at the pump were in Indiana (-10 cents), Ohio (-9 cents) and California (-9 cents).

Pump prices continue to be significantly discounted versus one year ago and motorists are poised to pay the lowest prices during the summer driving season since 2009. Retail averages are down in every state and Washington, D.C., with consumers 45 states and Washington, D.C. saving at least 75 cents per gallon year-over-year. The Midwestern states of Indiana (-$1.25) and Michigan (-$1.24) are posting the largest savings over this same period, and the price at the pump is down by $1 or more in a total of nine states.

As expected, OPEC opted to maintain its current production levels during its June 5 meeting in Vienna, and the global oil market is likely to remain oversupplied in the near term. The oil cartel explained its decision by citing expectations of increased demand from emerging economies and the fact that recent increases in the global price have made the market favorable for both producers and consumers. OPEC plans to continue to monitor developments in the coming months and could reassess their decision at their next meeting scheduled for December 4.

At the close of formal trading on the NYMEX on Friday, West Texas Intermediate crude oil increased $1.13, settling at $59.13 per barrel.

Tweet
Published in Latest News From Bumper to Bumper Radio
More in this category: « Car Shopping Secrets - Do Men or Women Pay More? Car Repair Savings from Lauren Fix, The Car Coach »
back to top