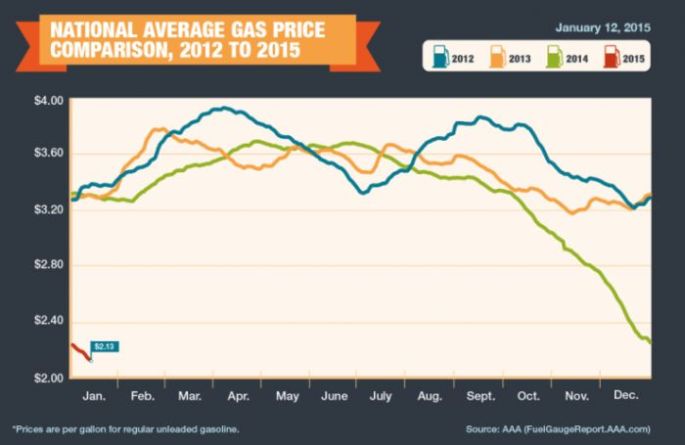 (WASHINGTON – January 12, 2015) U.S. motorists are paying an average price at the pump today ($2.13 per gallon) that is more than forty percent lower than the 2014 peak of $3.70 reached on April 28. The national average continues to test lows not seen since May 2009 and has now dropped a record 109 consecutive days for a total decline of $1.22 per gallon during this span. Today’s price is seven cents less than one week ago, 45 cents less than one month ago and $1.18 less than one year ago. Barring any major increases in the global price of crude oil, AAA expects the national average price for regular unleaded gasoline to remain below $3.00 per gallon in 2015.

Motorists in 11 more states saw their average price at the pump drop below $2 per gallon over the past week, bringing the total number of states below this threshold to 18. This number could rise to 25 by the end of next week given current trends. The average price at the pump is more than $2.50 per gallon in just five states and Washington, D.C. The nation’s least expensive markets continue to be in the mid-continent, with consumers in Missouri ($1.77), Oklahoma ($1.82) and Kansas $(1.84) paying the country’s lowest averages at the pump. For the second week in a row, Hawaii ($3.42) is the only state with an average above $3.00 per gallon, followed by Alaska ($2.93), New York ($2.62), California ($2.60) and Washington, D.C. ($2.57) as the most expensive markets.

The average price at the pump is down month-over-month in every state and Washington, D.C. Motorists in Idaho (-71 cents), Utah (-64 cents), Montana (-63 cents) and Wyoming (-62 cents) are enjoying the largest savings during this period, and drivers in a total of 17 states are posting discounts of 50 cents or more. Even consumers in the nation’s most expensive markets are seeing marked savings over this period, with discounts of more than a quarter in Hawaii (-30 cents), California (-30 cents) and Washington, D.C. (-34 cents).

Yearly comparisons continue to show the largest discounts and highlight the magnitude of the unprecedented multi-month decline in the gas prices. The most extreme year-over-year price drops have been in the Midwestern states of Michigan (-$1.45), Ohio (-$1.43), Indiana (-$1.40) and Illinois (-$1.31).  With the exception of the nation’s most expensive market, Hawaii (-59 cent), the price at the pump is down by at least 70 cents per gallon in every state and Washington, D.C. from this date last year. Drivers are saving more than $1.00 per gallon in 43 states and Washington, D.C., and nine states are registering discounts of $1.25 or more over this same period.

The dramatic slide in retail gas prices has been driven by a similar plummet in global crude oil prices since the end of the summer. This decline in the price of oil has been a product of weak demand combined with abundant supply. While lower gas prices are certainly a welcome relief for consumers, the broad impact of sustained low oil prices are front of mind for many industry stakeholders. In countries like the United States where the cost of oil extraction is more expensive, producers may be forced to reassess their plans to factor in profit margins that are sharply lower or even reversed as markets continue to register multi-year lows. Additionally, countries that rely heavily on oil revenues to fund government services may find themselves in situations where reductions to social programs are necessary, which could lead to civil unrest. Either of these dynamics has the potential to put upward pressure on prices.

The global price of crude has lost more than half its value since mid-2014. OPEC has reiterated that it will not intervene in the market to force prices higher and plans to sustain its current production levels, with the earliest possibility for supply reductions reportedly pushed to their next meeting scheduled for June. Sustained low prices for crude can also potentially influence the way global markets are assessed. Last week, the spread between WTI and Brent narrowed to approximately $1.75 per barrel and market watchers are even speculating whether the price of Brent will fall below WTI. Brent has not been priced below WTI since 2010, and less than a year ago it was trading at a more than $10 premium per barrel.

Tweet
Published in Latest News From Bumper to Bumper Radio
More in this category: « 1 Tip Could Save Your Life in a Car Crash - Lauren Fix Driving in Hazardous Winter Storm Conditions - Lauren Fix »
back to top