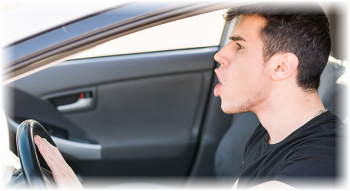 WASHINGTON, D.C. (July 14, 2016)- Nearly 80 percent of drivers expressed significant anger, aggression or road rage behind the wheel at least once in the past year, according to a new study released today by the AAA Foundation for Traffic Safety. The most alarming findings suggest that approximately eight million U.S. drivers engaged in extreme examples of road rage, including purposefully ramming another vehicle or getting out of the car to confront another driver.

“Inconsiderate driving, bad traffic and the daily stresses of life can transform minor frustrations into dangerous road rage,” said Jurek Grabowski, Director of Research for the AAA Foundation for Traffic Safety. “Far too many drivers are losing themselves in the heat of the moment and lashing out in ways that could turn deadly.”

A significant number of U.S. drivers reported engaging in angry and aggressive behaviors over the past year, according to the study’s estimates:

Nearly 2 in 3 drivers believe that aggressive driving is a bigger problem today than three years ago, while nine out of ten believe aggressive drivers are a serious threat to their personal safety.

“It’s completely normal for drivers to experience anger behind the wheel, but we must not let our emotions lead to destructive choices,” said Jake Nelson, AAA’s Director of Traffic Safety Advocacy and Research.

“Don’t risk escalating a frustrating situation because you never know what the other driver might do. Maintain a cool head, and focus on reaching your destination safely.”

The research report is available on the AAA Foundation’s website and is part of the annual Traffic Safety Culture Index, which identifies attitudes and behaviors related to driver safety. The data was collected from a national survey of 2,705 licensed drivers ages 16 and older who reported driving in the past 30 days. The AAA Foundation issued its first Traffic Safety Culture Index in 2008.

Tweet
Published in Latest News From Bumper to Bumper Radio
More in this category: « When, Where, How and Why to Change Your Vehicle’s Oil Gas Prices Drop to 12-Year Low for July »
back to top