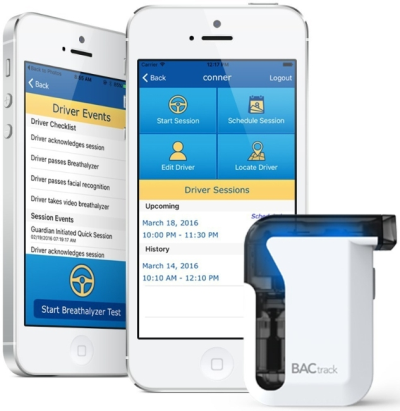 WILTON, Conn., June 23, 2016 /PRNewswire/ -- A brand new DUI monitoring system that allows parents and their kids to partner up to prevent drinking and driving launches August 1 in the Apple App Store. The GUARDRIDE™ system uses the Apple IOS platform on all fifth generation iPhones or newer. The system uses a BACtrack™ Mobile Bluetooth breathalyzer and leading edge facial recognition software to perform a 30 second test for young drivers before they get behind the wheel. If the kid fails the tests, or starts driving without taking the tests, their parents are notified so they can take action. GUARDRIDE just launched the system with an Indiegogo crowdfunding charitable campaign on June 22, to help donate systems to high schools where DUI tragedy has struck.

"Underage kids drink and drive 2.4 million times a month. Being the parent of two teenagers I worry, because I know that even a good kid can make a bad decision," said Brian Griffin, founder of GUARDRIDE. "I didn't want to be constantly worrying every time my kids went out with their friends, so I looked for a solution that could help but there was none so I created GUARDRIDE, which is based off the idea of "trust but verify," to give myself and other parents a tool to help keep our kids safe from drinking and driving."

GUARDRIDE contains two apps, one for parents and one for kids. Parents download the Guardian App on their phone while kids download the Driver App and are provided with the BACtrack™ Mobile Bluetooth Breathalyzer, which is one of the most accurate police grade fuel cell consumer breathalyzers on the market. Nothing has to be installed on the vehicle. A GUARDRIDE "session" occurs any time the system has been started and is actively monitoring the young driver. Young drivers are only required to take a test when they are participating in a GUARDRIDE session. Parents can schedule or start a GUARDRIDE session for a time when their high school or college age son or daughter will be driving and going out for the night with friends. The Driver App has a heartbeat connection with the GUARDRIDE server that looks for a live connection every 20 minutes during a session. If a heartbeat connection is not made, an alert is sent to the Guardian App to inform the parents that their son or daughters phone is offline and is no longer being monitored by the system.

During a GUARDRIDE session, the young driver must pass a breathalyzer test before they drive while identifying themselves using facial recognition software. If the driver fails the breathalyzer or the facial recognition test or starts driving without taking the test, the parent is notified and shown their son or daughter's map location using a GPS locator. The app uses a motion sensor technology to determine if a kid starts driving without taking the test. To learn more about the GUARDRIDE system, you can watch their video at http://vimeo.com/171105289.

In order to give parents an extra layer of safety, GUARDRIDE will soon be launching a patent pending steel Key Guard that will prevent kids from putting their key into the ignition until they pass their Breathalyzer test with facial recognition. They will also be creating a keyless entry Key Guard.

GUARDRIDE will be available in the Apple App store starting August 1. The Indiegogo charitable crowdfunding campaign is launching June 22 with limited quantity reward tiers ranging from $49 and up for discounted annual GUARDRIDE subscriptions. The BACtrack™ Mobile Bluetooth breathalyzer for the system is an additional $99. During the Indiegogo Campaign, for every 10 families that join GUARDRIDE, BACtrack™ and GUARDRIDE will donate one system to help various High Schools across the country where DUI tragedy has struck. People will also have the ability to buy a discounted system that will also be directly donated to the DUI affected high schools in the campaign . The future of GUARDRIDE includes a variety of young driver safety tools and resources as well as for the commercial and public transportation industries.

GUARDRIDE believes the best way to reduce drunk driving among young drivers is to create a way for parents to constructively engage with their kids and form a partnership based on the principle of "trust but verify". Because even a good kid can make a bad decision. GUARDRIDE is designed to help prevent that bad decision by having them agree to use the system every time they get behind the wheel during a session. And if they don't their parents will know. Learn more at http://guardride.com.

Tweet
Published in Latest News From Bumper to Bumper Radio
More in this category: « Gas Prices Drop for Nine Consecutive Days Trunk Shocker with Lauren Fix, the Lauren Car Coach »
back to top