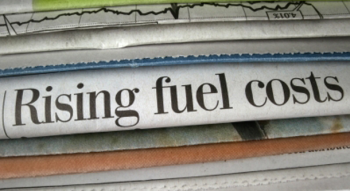 The cost of crude oil has moved higher over the past few weeks, which has made gasoline more expensive to start the summer driving season. Crude oil prices have increased due to unexpected disruptions in places like Canada and Nigeria, while questions continue to mount over future production in Venezuela. Since early April, the cost of crude oil has increased by more than $13 per barrel to the highest levels since 2015. With all other factors being equal, a $1 per barrel change in the price of crude oil can increase gas prices by 2.4 cents per gallon. Prices may continue to fluctuate on the heels of news related to global oil supply and the U.S. dollar, which could have a major impact on what drivers pay for gasoline this summer.

Retail averages on the West Coast are relatively steady and have moved by three cents or less over the past week. California ($2.86) is the nation’s most expensive market for retail gasoline, and regional neighbors Hawaii ($2.73) and Alaska ($2.67) are the only two states in the region also ranked in the nation’s top five most expensive markets. Consumers in the region continue to benefit from the largest yearly savings, with pump prices in nearly every state in the region discounted by more than 50 cents per gallon.  In fact, the largest year-over-year savings in the price of gas are seen in the West Coast states of: Nevada (-71 cents), Alaska (-71 cents) and California (-68 cents).

Conditions at the ExxonMobil Torrance, CA refinery are reportedly improving and two units previously offline are scheduled to be restarted this week. The latest data from the U.S. EIA points to gasoline inventories shrinking in the region, however, gasoline production is growing which could help balance the scale and keep gas prices relatively steady over the near term.

Pump prices in the Great Lakes states continue to climb higher due to tightening supply and healthy demand for gasoline. Michigan ($2.74) is the nation’s second most expensive market for gas, and the Great Lakes states of Ohio ($2.68), Illinois ($2.66) and Indiana ($2.61) join in the rankings of the nation’s top 10 most expensive markets. The nation’s largest price increases over the past few weeks have occurred in states located in this region. Gas prices are up double digits in Michigan (+23 cents), Ohio (+21 cents), Illinois (+18 cents), Indiana (+17 cents) and Wisconsin (+13 cents) versus two weeks ago.

Headlining the supply challenges in the region is the recent shutdown of a segment of the West Shore pipeline, located in Wisconsin. This segment is reportedly undergoing repair and inspections and may be offline for several weeks while the work is being completed. Operational challenges are also being reported at Marathon’s Detroit, MI refinery and ExxonMobil’s Joliet, IL plant.

Despite these supply issues, refinery production has increased over the past few weeks, while supplies are still about nine percent higher than a year ago. In response to recent distribution issues, both Michigan and Wisconsin’s governors took action extending the hours that drivers transporting fuel are permitted to stay on the road. In the near term, gas prices may remain volatile with summertime driving fueling high demand.

Pump prices in the region remain some of the cheapest nationwide with Oklahoma’s average at $2.15, Missouri at $2.19 and Kansas at $2.19 per gallon. Magellan is reporting that a segment of its pipeline, located in Kansas, was taken offline due to heavy rainfall, which caused a portion of the pipeline to be exposed. Service is likely to be suspended for several weeks while the pipeline undergoes repair. Supply in the region is reportedly ample and is believed to be capable of offsetting any shortages resulting from this incident.

Despite experiencing severe weather, which can sometimes cause prices to move higher due to supply disruptions, gas prices in the Gulf Coast remain relatively low. Every state in the region is represented in the nation’s top 10 least expensive markets, and Mississippi ($2.10), Arkansas ($2.12) and Louisiana ($2.15) are ranked in the nation’s top-five least expensive markets.

The Magellan Midstream Partner’s pipeline is reportedly under repair, following being shut down last week due to flooding in Texas. The pipeline delivers product to a number of markets in the region and its outage might impact regional fuel distribution. Gas prices in the region appear to be unaffected by the outage and are down on the week in every state located in the Gulf Coast. Best estimates suggest that the pipeline will return to operation before the end of the month, and in the interim the company is attempting to address any shortages by altering its delivery schedule.

The Southeast is home to the nation’s least expensive market, South Carolina ($2.08). Tropical Storm Colin brought heavy rains and tropical-storm-force winds to the region last week, yet gas prices held steady over this period. Contrary to common expectations, with the exception of West Virginia (+ fractions of a penny), prices fell in every state located in the region week-over-week.

After reaching new 2016 highs, crude oil prices retreated to close out the week due to news of a strengthening U.S. dollar and data showing an uptick in the number of U.S. drilling rigs in operation. Both benchmarks opened the week by extending this trend of sliding prices, as concerns of revived production out of the U.S. and global demand concerns begin to resurface. At the close of Friday’s formal trading session on the NYMEX, WTI closed down $1.49 and settled at $49.07 per barrel.