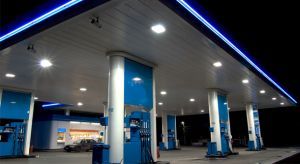 (WASHINGTON, June 29, 2015) - Despite rising prices over the past several months, drivers are poised to pay the lowest prices at the pump over the Fourth of July holiday weekend in at least five years. Today’s average price of $2.77 per gallon is down two cents versus one week ago and down three cents from the peak price to date for 2015, which was set on June 15. While pump prices are down on the week, they are up four cents per gallon month-over-month, largely due to regional refinery issues that put upward pressure on the national average over the last 30 days. Gas prices continue to reflect considerable yearly discounts with drivers saving an average of 90 cents per gallon versus this same date last year.

Pump prices often fall leading up to the Independence Day holiday. However, a seasonal decline in the national average this year has been offset by supply shortages due to localized refinery issues and global crude prices that have recovered from multi-year lows this spring.

Drivers in the Pacific Northwest are paying some of the nation’s highest prices for retail gasoline. After 16 consecutive weeks, Alaska ($3.47) has unseated California ($3.45) as the nation’s most expensive market for retail gasoline and is followed by regional neighbors – Hawaii ($3.37), Washington ($3.19) and Nevada ($3.19) – as the five most expensive markets. A total of seven states are registering averages above $3 per gallon. Consumers in South Carolina ($2.45) are paying the lowest averages at the pump. 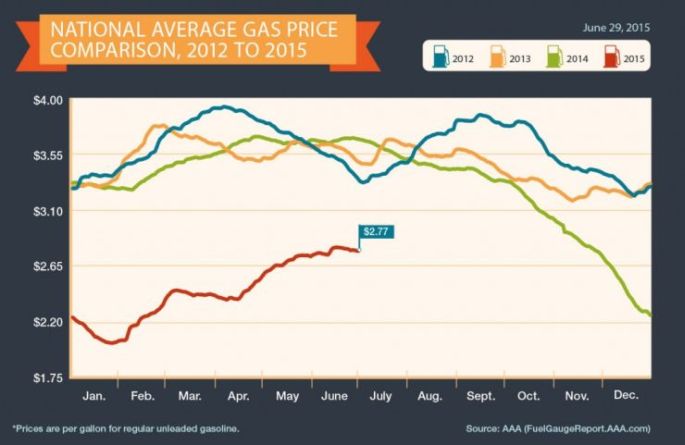 State level gas prices have been relatively stable over the past week, moving by +/- 3 cents in 45 states and Washington, D.C. Drivers in 39 states are experiencing weekly savings in the price at the pump, led by Illinois (-7 cents), Delaware (-6 cents) and Minnesota (-6 cents). Pump prices are up in 11 states and Washington, D.C., with the largest increases in price seen in the Midwestern state of Ohio (+8 cents).

The majority of drivers (44 states and Washington, D.C.) are paying more at the pump than one month ago, primarily due to the lingering effects of localized refinery issues. Retail averages are up by double-digits in ten states, led by the Midwestern states of Michigan (+21 cents) and Ohio (+18). On the other end of the spectrum, monthly comparisons reflect discounts in the price of retail gasoline in six states. Prices on the West Coast are recovering from a string of refinery issues, and motorists in California (-26 cents) and Nevada (-11 cents) are finally experiencing some price relief as production returns to normal.

Drivers nationwide are paying considerably less at the pump to refuel their vehicles compared to a year ago. Retail averages are discounted by more than $1 in three states: Kentucky (-$1.02), Connecticut (-$1.02) and Michigan (-$1.01), and motorists in 45 states and Washington D.C. are saving more than 75 cents per gallon year-over-year.

Concerns of oversupply continue to characterize the global oil market. The pending June 30 deadline for an Iranian nuclear deal could contribute further to the market’s oversupply if current sanctions are removed and Iranian oil returns to the global market. However, a string of attacks in France, Tunisia, and Kuwait have been closely watched for any impact on geopolitical instability in crude-producing regions in the Middle East and North Africa. Escalating tensions in these regions have the potential to cause supply disruptions, which could contribute to price volatility in the near term.

Market watchers are also paying close attention the European Union, where Greece may default on its debt obligations this week. This sets up a Greek referendum for this coming weekend on whether the country should accept a bailout deal offered by international creditors. This news sent global oil prices lower this morning on worries of reduced global demand and the potential for instability in global financial markets.

At the close of Friday’s formal trading on the NYMEX, WTI was down seven cents and settled at $59.63 per barrel.

Tweet
Published in Latest News From Bumper to Bumper Radio
More in this category: « AAA Projects 41.9 Million Americans will Celebrate Independence Day with a Holiday Getaway How to Tell if Water Has Damaged Your Car »
back to top