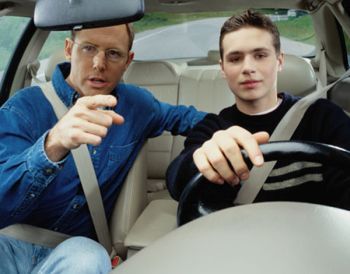 Teaching a child how to drive safely is an act of parental love — and societal responsibility. In this series of short documentaries filmed by photojournalists from Getty Images Reportage, watch how three families in different communities are navigating this rite of passage.

Dad is in a hurry. He takes a sip of coffee as the traffic slows, then reaches around to the back seat for his briefcase. All the while, he’s giving his teenage son important advice about the SATs and the upcoming prom.

Then the phone rings. “I shouldn’t do this,” the father tells his son, as he juggles his cell and the steering wheel. “But this is important.”

Parents lay down best practices, with love. From brushing teeth to sharing nicely — it starts young and goes on for years — to exercise, eating right and studying hard. And when teens go for their first driver’s license, parents pride themselves on being role models on the road, too. It’s no doubt vital. Vehicle accidents are the leading cause of serious injury and death for 16- to 19-year-olds, claiming about seven lives in the United States every day.

Yet too few parents recognize the power of their own precedent. Kids learn from repetition and patterning, as psychologists and teachers know. It’s as true on the road as it is at home. So well-intentioned lectures about driving safely are all too likely to fall on deaf ears if the parents themselves have taken foolish risks while their kids were watching from the back seat.

“Driver education begins the day a child’s car seat is turned around to face front,” says Tina Sayer, Principal Engineer for Toyota’s Collaborative Safety Research Center. “Always be the driver you want your teen to be.”

According to a landmark study — one of the largest of its kind — conducted by the University of Michigan Transportation Research Institute (UMTRI) and Toyota, teens’ driving habits are influenced far more by what they see their parents do than what their parents say.

Oz Rabinowitz understands this, and he worries about it. The Framingham, Mass. father experienced a devastating crash when he was seven. Everyone survived. “But I saw my father bleeding and my mom screaming,” he recalls. “It changed our lives forever.”

So Rabinowitz and his wife, Ann, have tirelessly reminded their three children to fasten seat belts and obey speed limits. However, they also admit that on occasion they’ve broken their own rules, sometimes texting and making calls while driving.

“That’s a horrible, horrible habit,” Ann says. “I'm teaching them the bad habit. But hopefully, my kids are smarter than me.”

All parents would like to think so. But from the minute kids first see their parents at the wheel, they start focusing on their parents as drivers — and they learn far more from their parents’ behavior than from their cautionary words. The UMTRI-Toyota study found not only that teen drivers imitate their parents’ careless habits, but that they do so disproportionately.

The study, based on telephone interviews with 5,500 young drivers and parents, includes 400 parent-teen pairs from the same households. It finds outsized correlations from one generation to the next. Teens who recall seeing their parents balance a drink or rummage for cell phones while driving are three to four times more likely than others to do the same.

This is very dangerous. Simply reaching for an object increases the risk of a crash by a factor of nine, according to a separate study by the Virginia Tech Transportation Institute (VTTI). Add all of these risky activities together, and distractions account for 18 percent of road fatalities in the United States, the government estimates.

Many parents, when pressed, will admit that they take risks on occasion — but only in extenuating circumstances. Their kids, they trust, will differentiate between good safety norms and the exceptional phone call they dial or bottle they fetch for a crying baby.

“If you do it one time, it becomes magnified much more in their minds. So it’s important to cut down to zero.”

Step one is to never use the phone while driving. So no reaching for it, no dialing and certainly no texting. Also avoid the many other liberties drivers take — such as turning around to referee a back-seat quarrel or applying a dab of lipstick. They also lead to accidents, while setting a dangerous example for future drivers in the car.

Eating, grooming and reading are all dangerous distractions, says Sayer. Drinks are among the most frequent distractions reported. “We don’t think about what happens when we spill,” she says. “If you take your hands off the wheel, or your eyes of the road, that’s when you’re at increased risk.”

The UMTRI-Toyota study uncovered other surprising generational issues among drivers. Parents — perhaps to ease their anxieties — underestimate the risks their children take. Twenty-six percent of teens, for example, admit to reading or sending a text at least once every time they drive. Yet when parents were asked if their kids did so, only 1 percent said yes.

Overall, all drivers are texting about 3 percent of the time they’re on the road. If those drivers have kids in the car, risks will multiply as the next generation takes the wheel.

Some young people understand the risks involved and police their parents. In life, “I want to beat stereotypes,” says De’Qonton Davis, a 17-year-old from St. Petersburg, Fla. Likewise on the road. When he sees his mother, LaQonya Stewart, texting in the car, he takes the phone away from her, she says. “‘We’re in the car,’ he says. ‘If we get in an accident, don’t you care about us?’”

Even careful teen drivers, though, face the risk of backsliding once they grow comfortable behind the wheel. The VTTI study found that brand new drivers cede less to distractions than experienced drivers, but only for the first six months they’re on the road.

After that, feeling more comfortable, they catch up with the average. By the time teens have been driving for 16-18 months, they’re distracted twice as much as the average driver.

At this point, as teens grow confident and comfortable behind the wheel, they come to consider themselves grown-up drivers. For many of them, unfortunately, this means taking on the risky habits they’ve learned from their parents.

Tweet
Published in Latest News From Bumper to Bumper Radio
More in this category: « Distracted Driving -- Testing Drivers While Text Messaging The Future of Driving - US Auto Sales & Technology »
back to top