Nearly One Million Cars Registered in Arizona Are Defective 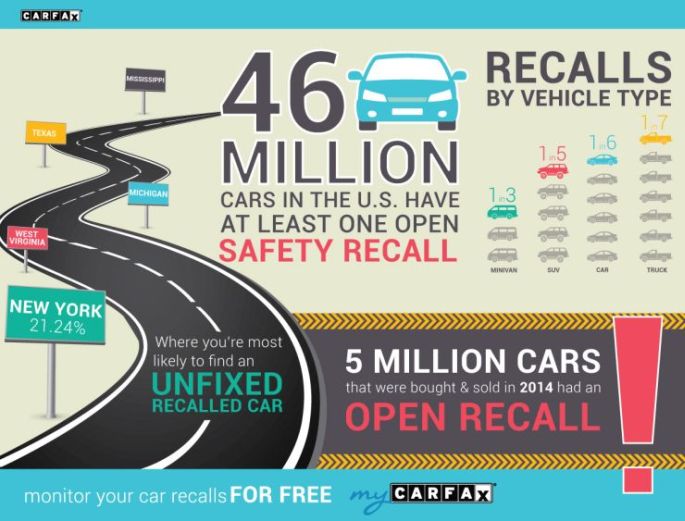 SAN FRANCISCO (January 26, 2015) — New research from Carfax suggests that millions of people may be driving, buying, or selling potentially dangerous cars due to an unfixed recall. The company’s annual research on the issue shows more than 46 million cars nationwide have at least one safety recall that’s never been fixed. In fact, five million of them were bought and sold by potentially unsuspecting consumers in 2014.

One of the most alarming discoveries is that people driving or buying family-oriented vehicles – specifically minivans and SUVs – are most at risk. One in three minivans and one in five SUVs has an unfixed recall, according to Carfax.

“America’s cavalier response to manufacturer safety recalls is putting lives at risk,” said Larry Gamache, communications director at Carfax. “Every morning millions of people drive to work, school and other places in a potential ticking time bomb. Fires, crashes and serious injury are just a few consequences of letting recalls go unfixed. The minor inconvenience that comes from having a recall fixed pales in comparison to what can happen if you don’t.”

“Carfax and the auto manufacturers are working hard to help eliminate this problem,” continued Gamache. “Car owners and buyers can easily find out about open recalls through the myCarfax app for free and on Carfax Vehicle History Reports.”

Open recalls can impact a vehicle’s safety, performance and resale value. To help find open recalls, Carfax monitors your car for open recalls using only the license plate with the free myCarfax app. Car buyers worried about buying a car with an unfixed recall can shop with confidence at the all-new Carfax.com. Every vehicle listed for sale there comes with a free Carfax Report, which includes open recall information reported to Carfax.