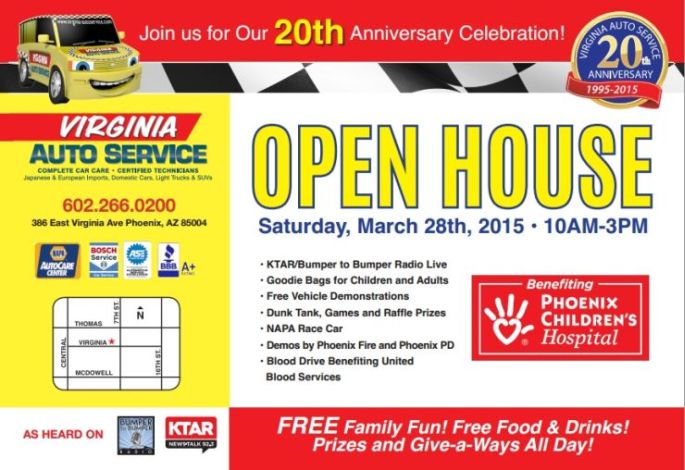 Open house will include a live remote broadcast of Phoenix’s number one car show, Bumper to Bumper Radio, heard every Saturday at 11:00 am on 92.3 FM KTAR.

Matt Allen was just 24 years old when he discovered Virginia Auto Service for sale on the corner of 7th Street and Virginia Avenue in Central Phoenix.  Although the building was boarded up and in need of many repairs, through Matt’s eyes, the shop looked like his lifelong dream come true. So with a little money, and a lot of elbow grease, Virginia Auto Service opened its doors.

Over the last 20 years, Virginia Auto Service has weathered several storms including a devastating arson fire in 2004 that almost wiped them out.  Through it all, Allen has persevered and built a business that has won several awards and stands out as being one of the best auto repair shops in Phoenix.

“If I would have known then, what I know now,” says Matt Allen, referring to the challenges of the past 20 years “I still would have opened Virginia Auto Service.”

Virginia Auto Service provides complete car care in Central Phoenix, Arizona.  They are A+ rated and accredited by the Better Business Bureau.  Virginia Auto Service has won several awards including the Phoenix Chamber of Commerce Impact Business of the Year Award, Motor Age Magazine Top Shop, and “Readers’ Choice for Best Auto Repair in Phoenix” by AZCentral.com.  For more information go to:  http://www.virginiaautoservice.com.

Tweet
Published in Latest News From Bumper to Bumper Radio
More in this category: « Consumer Reports Reveals the Best Used Cars for All Budgets Nearly One Million Cars Registered in Arizona Are Defective »
back to top