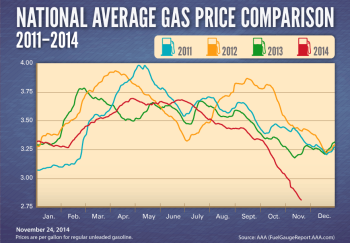 Across the country motorists are enjoying low prices due to production exceeding demand and relatively few issues at local refineries. Consumers in South Carolina and Missouri are paying the nation’s lowest average price at the pump, $2.57 per gallon, and 38 states are posting averages below the $3.00 per gallon threshold.

On the other end of the spectrum, states located on the West Coast and northeast continue to lead the nation registering the nation’s highest averages, led by Hawaii ($3.91), Alaska ($3.54), New York ($3.20) and Connecticut ($3.14). For the third week in a row, the average price for retail gasoline is below $4.00 per gallon in every state and Washington, D.C.

The price at the pump is down in every state and Washington, D.C. in comparison to one week ago. Thirty-six states and Washington, D.C. are posting week-over-week savings of a nickel or more and drivers in seven of these states have seen prices fall by a dime or more over this same period. Production continues to outpace demand in the Midcontinent, contributing to additional savings at the pump for states in that region. The largest discounts are seen in Indiana, Michigan and Ohio, where the average price is down by 13 cents per gallon.

Consumers in every state and Washington, D.C. are also paying less to refuel their vehicles both month-over-month and year-over-year. Monthly averages are discounted in 49 states and Washington, D.C. by at least 15 cents and 19 states are posting savings of one quarter or more per gallon. Motorists in Minnesota (-39 cents), Oklahoma (-35 cents), California (-32 cents) and Indiana (-32 cents) are experiencing the biggest savings over this period.

The most dramatic savings are seen on a year-over-year basis. Retail prices are lower by at least a quarter per gallon in the majority of states (41). The largest drops in the price at the pump versus last year are seen in the Atlantic Coast States of Florida (-59 cents), South Carolina (-57 cents), Virginia (-57 cents) and North Carolina (-56 cents), however 12 additional states are just behind with their average prices discounted by fifty cents or more per gallon.

The abundance in global supply has contributed to a number of global benchmarks trading at multi-year lows, and market watchers are anxiously awaiting the outcomes of two major events scheduled for later this week to see how they will impact prices. The Organization of Petroleum Exporting Countries (OPEC) is scheduled to meet this Thursday, and will respond to the growth in world oil supply by either cutting or sustaining its current production levels. Additionally, Iran is scheduled to meet with world leaders to discuss the possible relaxation of sanctions that have been in place since late-2011. Prior to the sanctions, Iran was one of OPEC’s leading producers and the lifting of these restrictions could inject additional supply into the global oil market. At the close of formal trading on Friday West Texas Intermediate (WTI) crude oil closed 60 cents higher at $76.43 per barrel. While oil prices did increase slightly to close out last week, WTI has now settled below $80 for three straight weeks – the longest streak since September 2010.

Tweet
Published in Latest News From Bumper to Bumper Radio
More in this category: « Home for the Holidays: Is Your Car Up for the Journey? Ten Really Expensive Auto Service and Repair Mistakes to Avoid, circa 2014 »
back to top