Consumers Want and Will Pay for Active Safety. It Just Might Save Their Lives 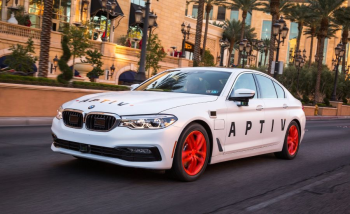 DUBLIN, June 22, 2018 - In 1999, Aptiv (then Delphi) put the first radar on a car. Ever. It was a 1999 Jaguar, and we joked that if you bought the radar, you got the car for free. With that first system, we took a technology from aerospace and put it on a car. It was a revolutionary break-through, and is one that has since saved countless lives. But, as the joke implies, it was very expensive at the time.

That's how it goes with most technology when it's first introduced – expensive and only available on premium or select vehicles. But over time as the technology proliferates, production volumes increase, and continuous improvement in the technology makes its impact, prices invariably come down. Just think of flat-screen TVs. When they were first introduced, they were astronomically expensive. Now, flat-screens are norm and affordable for all market segments. We call this phenomenon the democratization of technology – a progression in which the tech becomes available and affordable to all. The phenomenon is no different with automotive technology.

When the radar was introduced to the automotive space, it was a radical leap forward from the anti-lock braking and traction control systems that represented the early steps in 'active safety' technology. It also represented a completely different approach from 'passive safety' systems – e.g. seatbelts and airbags, where the technology worked to keep passengers protected during a crash. Now, we have technology that proactively helps prevent crashes.

And we need it.

Roads have become more crowded, drivers more distracted, and people are causing more accidents. According to NHTSA, 94 percent of accidents are directly related to human error. And a staggering 1.25 million deaths annually are caused by vehicles, according to the World Health Organization. That means every 30 seconds, someone dies in a car accident.

Aptiv can help solve that.

Just a half-second can mitigate 60 percent of accidents – and that half-second is exactly what active safety systems can provide. Technologies like adaptive cruise control, which adjusts the speed of your car if the car in front of you slows down, lane keeping systems, which alert you if you start to veer out of your lane, and emergency braking, which stops your car even if you don't – can all decrease the severity of crashes or prevent accidents completely.

You can see, first-hand, in the video from one of our customers how active safety works. The Aptiv active safety system engaged a full brake intervention on this truck and prevented a rear-end collision. The automatic emergency braking (AEB) technology reacted faster than the driver, giving him that extra half-second, in a traffic scenario that drivers encounter daily. In this real-life example, the AEB perhaps even prevented a tragedy; when you consider the size of a truck, the size of the small car it was about to hit and the speed at which vehicles travel on European highways.

But what about cost?

Until recently, most of this technology was only available on premium cars, and was out of reach for most people.

However, an accelerating pace of innovation over the past decade, and ever-growing initiatives in vehicle automation and autonomous cars, has led to raised awareness of driver safety and assistance systems. Increased consumer awareness has resulted in an increase in demand for these active safety systems. As the technology has been installed on smaller cars, which are in higher demand on a global basis, the adoption and use of the systems has further accelerated. Today, cars with Advanced Driver-Assistance Systems (ADAS) generally have anywhere from two to ten sensors working to protect their occupants.

In order to try and decrease accidents, some governments have been increasing mandates, which has also driven a proliferation of these technologies. For instance, the European Union has mandated the automotive manufacturers to fit ADAS such as lane departure warning systems (LDWS) and autonomous emergency braking systems (AEBs) in all heavy commercial vehicles weighing more than 7,000 kilograms. Also in Europe, to achieve the NCAP's highest five-star rating, a car must have active safety systems. In the U.S., all new cars must have back-up cameras, and 20 automakers have agreed to make AEB standard on all new vehicles by 2022.

All this has fueled market growth and reduced costs – it's the democratization of technology at work.

Aptiv is a leader in active safety technology.

We've come a long way since that first radar on the Jaguar, and we're now working on our eighth-generation of radar. Aptiv's innovations in active safety have been core to the growth in the industry and have helped fuel consumer appetite for the technology. Our safety-enhancing solutions have been finalists 14 times in Automotive News PACE Awards, an award recognized around the world as the industry benchmark for innovation – five of those winners. Additionally, we have increased our customer count from five global automakers in 2015 to 20 in 2020.

At Aptiv, we're proud to be an integral part of the democratization of active safety systems. We see a monumental increase in the proliferation of these technologies globally ahead of us, which we hope will lead to an equally monumental decrease in accidents and deaths involving vehicles.

On a personal note, when I take my family, my wife and three sons, on road trips (a frequent occurrence in the summer), I do so with the knowledge and comfort that, thanks to the active safety systems already installed in the global fleet of vehicles, we are already safer now than we have ever been. I can't imagine getting on the road with that precious cargo without that protection.

Tweet
Published in Latest News From Bumper to Bumper Radio
More in this category: « Big Moves in the Auto Market with Lauren Fix, The Car Coach National Gas Price Average 12-Cents Cheaper Than Memorial Day »
back to top