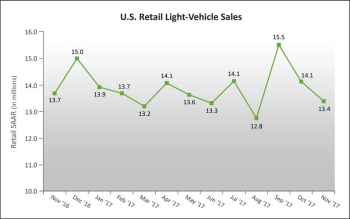 Incentives Spending on Track to Reach the Highest Level Ever

DETROIT, Nov. 27, 2017 --  For the seventh time this year, the new vehicle retail sales pace in November is expected to fall from year-ago levels, according to a forecast developed jointly by J.D. Power and LMC Automotive. The seasonally adjusted annualized rate (SAAR) for retail sales is expected to be 13.4 million units, down 300,000 from a year ago. Retail sales in November are anticipated to reach 1,119,600 units, a 0.1% decrease (selling days adjusted) compared with November 2016.

"The need to clear out record inventories of prior model-year vehicles continues to keep incentive spending aggressive in November," said Thomas King, Senior Vice President of the Data and Analytics Division at J.D. Power. New model-year vehicles account for just 44% of month-to-date sales compared with 53% in November 2016.  Average incentive spending per unit to date in November is at $4,065, just shy of the record $4,091 set in September.

"Savvy car shoppers took advantage of additional discounts over the Thanksgiving weekend, and that sales bump will likely push spending to a new all-time high," King said. Last year, retail sales after Thanksgiving accounted for 32% of November sales, while spending also subsequently rose by nearly 11% over the same period.

Jeff Schuster, Senior Vice President of Forecasting at LMC Automotive, said, "Thanks to incentive levels and some timed fleet sales, the sales rate in the second half of the year has remained ahead of expected natural demand, with the overall decline remaining primarily a downward adjustment to fleet mix. We believe risk heading into next year is balanced. However, without incentive intervention or a return to higher rental car fleet sales, demand is expected to contract for the second year in a row."

Tweet
Published in Latest News From Bumper to Bumper Radio
More in this category: « Heading into December, Gas Prices Decline Across the Country 90 Percent of Senior Drivers Don’t Make Vehicle Adjustments That Can Improve Safety »
back to top