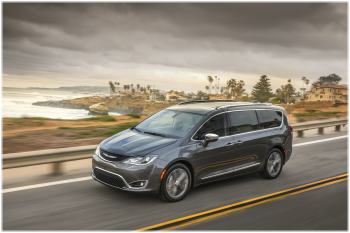 The achievement marks yet another minivan milestone for FCA US LLC, which pioneered the segment more than 30 years ago.

"Having sold more than 14 million minivans since inventing the segment in 1983, we know what's important to minivan buyers," says Tim Kuniskis, Head of Passenger Car Brands – FCA North America. "The 2017 Chrysler Pacifica is the sum of all the knowledge we've accumulated about minivans and the people who are proud to own them. Among the things we know – safety is one of the most important purchase reasons and achieving the Top Safety Pick+ rating helps to establish Pacifica as the segment leader."

While the all-new Pacifica achieves top scores for crashworthiness, the best safety features are those that help drivers avoid collisions. The Chrysler Pacifica's Automatic Emergency Braking (AEB) system earns a rating of "superior," the highest possible grade that IIHS awards for this technology.

The Pacifica's system is called Forward Collision Warning-Plus. It features sensor-fusion technology, which combines the particular attributes of radar sensors and cameras for greater precision. The system only responds when camera and radar agree that a frontal impact appears imminent.

Sensor-fusion, once reserved for luxury-segment vehicles, is the technology of choice at FCA US, says Mike Dahl, Head of Vehicle Safety and Regulatory Compliance.

"As AEB capability proliferates across our vehicle lineup, we are committed to using sensor-fusion technology," Dahl says. "It is a significant stepping stone in our exploration of autonomous-vehicle development, the next horizon for occupant safety."

No mainstream automaker offers AEB in more segments than FCA US LLC. AEB is available in nine FCA US vehicles across six segments:

Top Safety Pick+ status is contingent on the availability of AEB technology, provided the system achieves ratings of "advanced" or "superior" and the vehicle achieves "good" ratings for crashworthiness. IIHS crash tests simulate:

Material choice is a key contributor to the all-new Pacifica's outstanding crashworthiness. High-strength steel accounts for 72 percent of its body structure, 38 percent of which is Advanced High-Strength Steel (AHSS).

High-strength materials engineered into the all-new Pacifica, such as press-hardened steel and AHSS, which is up to 300 percent stronger than conventional "mild" steel, afford structural benefits while also delivering fuel-saving weight reduction. The all-new Chrysler Pacifica is 250 pounds lighter than the vehicle it replaces, and its body structure accounts for more than half of that difference.
The 2017 Chrysler Pacifica joins the 2016 Fiat 500X and 2016 Chrysler 200 on the list of vehicles to earn Top Safety Pick+ status for 2016. The Pacifica boasts more than 100 available safety and security features, from LaneSense Lane Departure Warning-Plus, to 360-degree Surround View, which provides a bird's eye view of the vehicle and its surroundings – from the driver's seat.

Tweet
Published in Latest News From Bumper to Bumper Radio
More in this category: « U.S. DOT Issues Federal Policy for Safe Testing and Deployment of Automated Vehicles  National Average Remains Steady Despite Pipeline Issues in Southeast »
back to top