What is "Under the Influence"?
According to the survey results, teens claim to understand the dangers surrounding drinking and driving:

However, when asked about actual driving behavior involving alcohol, driving "under the influence" takes on a different definition:

According to the National Highway Traffic Safety Administration, with a quarter of fatal crashes involving young drivers resulting from drinking and driving, these statistics are a reminder that even one drink can be too many.

"While many teens seem to have gotten the message about these driving dangers, the real challenge is to make sure they understand that even a sip of alcohol or a quick text at a red light can be deadly," said David Melton, driving safety expert with Liberty Mutual Insurance and managing director of global safety. "Teens need to realize it's not acceptable to put an allowable limit to their engagement in these behaviors – they need to be eliminated entirely when they are behind the wheel."

Defining "Designated"
While underage drinking is never acceptable and always illegal, many teens and parents consider a designated driver to be a safe alternative to impaired driving. In fact, more than half of parents (58 percent) encourage teens to use designated drivers to avoid driving under the influence, and almost half of teens (47 percent) admit to using one.

However, teens' definitions of "designated" are concerning:

"With teens reporting these lax definitions of what it means to be 'under the influence,' a zero tolerance approach is the only answer to prevent potential tragedy," said Stephen Gray Wallace, senior advisor for policy, research and education at SADD. "The parents and community have a responsibility to initiate and maintain an open dialogue with teens about exactly what driving under the influence means."

Talking and Texting Behind the Wheel
According to the U.S. Department of Transportation, more than 3,300 deaths were reported in 2012 alone as the result of distracted driving, many attributed to talking or texting on a cell phone.  Teens seem to understand the dangers of these behaviors:

However, according to the new data, teen drivers often do not grasp the dangers of what it actually means to use a phone while driving:

"It's critical not only for teens, but all drivers to understand that any time you pull out your phone when you are driving, whether you're moving or at a stoplight, your attention is diverted and you put yourself, passengers and others on the road at risk," said Melton. "If you need to use your phone while driving, find a safe place to pull off the road to make a call or send a text. It's not worth the risk to respond at a stop sign or before the light turns green." 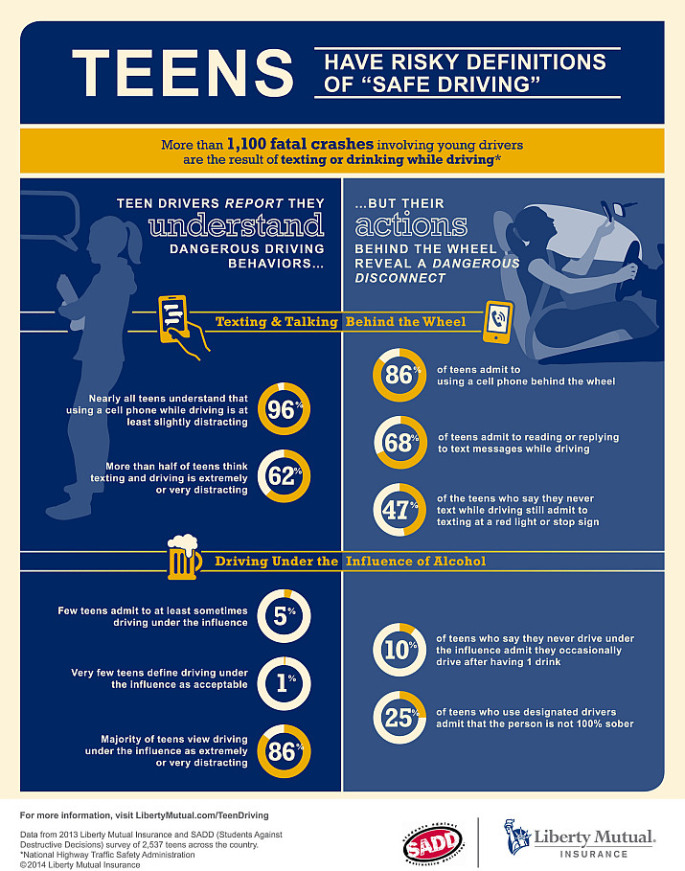 Open Discussions Among Parents and Teens
Liberty Mutual Insurance and SADD encourage parents to have conversations with their teens about responsible driving and to sign a Parent/Teen Driving Contract. The customized agreement enables parents to create and uphold family driving rules.  For more information about safe teen driving and to download a contract, visit www.LibertyMutual.com/TeenDriving.

About the Study
Liberty Mutual Insurance and SADD commissioned ORC International to conduct a qualitative and quantitative methodology to measure teen driving attitudes and behaviors. The study was initiated with a series of focus groups held in Philadelphia, Pa., and Dallas, Texas from May 29 – May 30, 2013, followed by a survey of 2,537 eleventh and twelfth graders from across the country. Overall the findings from the study can be interpreted at a 95 percent confidence interval with an error margin of +/- 1.68 percent. Error margins for subsets such as licensed drivers will be wider. Additionally, the study surveyed 1,000 parents of high school aged teenage drivers, providing an overall error margin of +/- 2.94 percent.

About SADD
SADD, the nation's leading peer-to-peer youth education, prevention, and activism organization, is committed to empowering young people to lead initiatives in their schools and communities.  Founded in 1981, today SADD has thousands of chapters in middle schools, high schools and colleges.  SADD highlights prevention of many destructive behaviors and attitudes that are harmful to young people, including underage drinking, other drug use, risky and impaired driving, and teen violence and suicide.  To become a Friend of SADD or for more information, visit sadd.org, parentteenmatters.org or follow SADD on Facebook, Twitter and YouTube.

The sixth-largest auto and home insurer in the U.S., Liberty Mutual (libertymutual.com) sells full lines of coverage for automobile, homeowners, valuable possessions, personal liability, and individual life insurance and annuity products.  The company is an industry leader in affinity partnerships, offering car and home insurance to employees and members of more than 14,000 companies, credit unions, professional associations and alumni groups.

Tweet
Published in Latest News From Bumper to Bumper Radio
More in this category: « Study Reveals Singing Out Loud is Top Activity While Driving Video: How to Find the Right Auto Repair Shop in Phoenix, Arizona »
back to top