American Drivers Aren’t Securing Their Loads on the Road 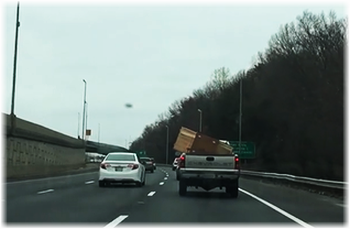 WASHINGTON, D.C. (Aug. 11, 2016)- More than 200,000 crashes involved debris on U.S. roadways during the past four years, according to a new study released by the AAA Foundation for Traffic Safety. resulted in approximately 39,000 injuries and more than 500 deaths between 2011 and 2014. AAA is calling for drivers to properly secure their loads to prevent dangerous debris.

“This new report shows that road debris can be extremely dangerous but all of these crashes are preventable,” said Jurek Grabowski, research director for the AAA Foundation for Traffic Safety. “Drivers can easily save lives and prevent injuries by securing their loads and taking other simple precautions to prevent items from falling off the vehicle.”

About two-thirds of debris-related crashes are the result of items falling from a vehicle due to improper maintenance and unsecured loads. The most common types of vehicle debris are:

Drivers can decrease their chances of being involved in a road debris crash by:

Maintaining Their Vehicles: Drivers should have their vehicles checked regularly by trained mechanics. Badly worn or underinflated tires often suffer blowouts that can leave pieces of tire on the roadway. Exhaust systems and the hardware that attach to the vehicle can also rust and corrode, causing mufflers and other parts to drag and eventually break loose. Potential tire and exhaust system problems can easily be spotted by trained mechanics as part of the routine maintenance performed during every oil change.

Securing Vehicle Loads: When moving or towing furniture, it is important to make sure all items are secured. To properly secure a load, drivers should:

“Drivers have a much bigger responsibility when it comes to preventing debris on the roads than most realize,” said Jennifer Ryan, director of state relations for AAA. “It’s important for drivers to know that many states have hefty fines and penalties for drivers who drop items from their vehicle onto the roadway, and in some cases states impose jail time.”

Currently every state has laws that make it illegal for items to fall from a vehicle while on the road. Most states’ penalties result in fines ranging from $10-$5,000, with at least 16 states listing jail as a possible punishment for offenders. AAA encourages drivers to educate themselves about specific road debris laws in their state. Drivers should also practice defensive driving techniques while on the road to prevent debris related crashes from occurring.

“Continually searching the road at least 12 to 15 seconds ahead can help drivers be prepared in the case of debris,” said William Van Tassel, Manager of Driver Training Programs for AAA. “Always try to maintain open space on at least one side of your vehicle in case you need to steer around an object. If you see you are unable to avoid debris on the roadway, safely reduce your speed as much as possible before making contact.”

AAA also recommends that drivers avoid tailgating and remain alert while on the road. Additional tips on defensive driving and how to report road debris to the proper authorities are available online at AAA.com/PreventRoadDebris.

Established by AAA in 1947, the AAA Foundation for Traffic Safety is a 501(c)(3) not-for-profit, publicly-supported charitable educational and research organization. Dedicated to saving lives and reducing injuries on our roads, the Foundation’s mission is to prevent crashes and save lives through research and education about traffic safety. The Foundation has funded over 300 research projects designed to discover the causes of traffic crashes, prevent them and minimize injuries when they do occur. Visit www.AAAFoundation.org for more information on this and other research.