Michelin's 'Beyond the Driving Test' Drives Change in 31 States 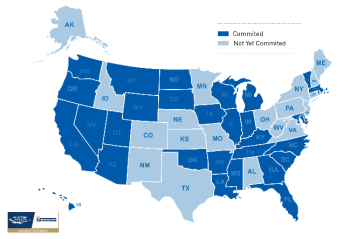 The campaign's goal is to address tire safety education and information gaps in all 50 states by 2020.

"Michelin is committed to transforming tire safety education for new drivers to help make our nation's roadways safer for all motorists," said Pete Selleck, chairman and president of Michelin North America. "Beyond the Driving Test is a multifaceted campaign focused on shifting driver's education policy while mobilizing teen and parental involvement in road safety—all with the goal of saving lives. Michelin and the FIA applaud the 31 states that have already committed to including tire safety as a standard in their driver's manuals. We encourage all other states to include this critical safety information as Michelin continues toward our goal of compliance in all 50 states by 2020."

In addition to securing the commitments of nearly two-thirds of all U.S. states in less than two years to include information specific to tire wear, tread depth and proper tire pressure in their driver's manuals, Michelin has also focused its efforts on raising awareness of the importance of tire safety and maintenance among millions of teens and parents.

"Year after year, automobile crashes remain the number one killer of teens in the United States," said Selleck. "As a matter of public policy, Michelin is joining with road safety organizations and state administrators to ensure that adequate information regarding tire safety is available to new drivers in all 50 states to help prevent crashes and to reduce the number of deaths related to tire safety issues."

"Communicating with teens directly on their turf has been key to the success of Beyond the Driving Test," said Selleck. "Meeting young drivers where they interact enables Michelin to start a conversation about tire safety to raise awareness of simple steps teens can take that can help save lives."

In March 2016, Michelin's Beyond the Driving Test teen YouTube influencer campaign was selected by PRWeek as the 2016 Community Relations Campaign of the Year in the U.S. Michelin generated millions of unique views from notable teen YouTube stars Brent Rivera, Alexis Zall, and Jack Gillensky and Jack Johnson, who continue to reach teens directly with the message of tire safety via social media.

Beyond the Driving Test has also been recognized by the Public Relations Society of America with three 2016 Silver Anvil Awards, making it among the most awarded corporate performance and responsibility campaigns of the year.

In 2015, Michelin and the American Driver and Traffic Safety Education Association (ADTSEA) published the first formalized tire safety curriculum in the United States as a component of ADTSEA's national curriculum, which has been delivered to hundreds of driving instructors across the country.

Tweet
Published in Latest News From Bumper to Bumper Radio
More in this category: « Partially Automated Cars Provide Enough Benefits to Warrant Widespread Adoption of Current Safety Technologies The Condition is Critical to Build a New Emergency Department - Your Donations Matter! »
back to top