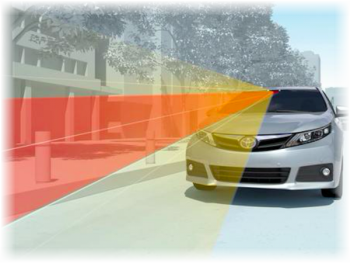 Just days after automakers and federal regulators reached a deal that would make forward-collision warning and automatic emergency braking standard in vehicles by 2022, Toyota says it’ll do one better — make these safety features standard years ahead of schedule.

The carmaker announced Monday that Toyota Safety Sense and the Lexus Safety System + packages will come standard on almost every new vehicle by the end of 2017.

In all, Toyota says the packages, which are already offered as an option on several of its Lexus and Toyota vehicles, will be standard on 25 of 30 models by 2017.

“At Toyota, we are committed to creating better ways to move for everyone,” Jim Lentz, CEO of Toyota Motor North America, said in a statement. “We are proud to help lead this industry in standardizing these systems and bring automated braking to our customers sooner rather than later.”

The five models that will not receive the feature by 2017 include the Lexus GX, Toyota Mirai, 4Runner, and 86, and Scion iA.

Last week, the National Highway Traffic Safety Administration and Insurance Institute for Highway Safety unveiled an agreement with 20 automakers to put these features – which use cameras, sensors, and radar to automatically brake a vehicle when an object is in its path — in almost all the cars they make starting with 2022.

The Insurance Institute for Highway Safety — the organization that gets to slam cars into walls for science — says that vehicles equipped with forward-collision warning and automatic braking see incidents of rear-end collisions reduced by 40%, with bodily injury claims cut by 30%.

Tweet
Published in Latest News From Bumper to Bumper Radio
More in this category: « 52 Cars You Can Own for Under $300 a Month 5 Signs That Your Sparkplugs Need to Be Replaced »
back to top