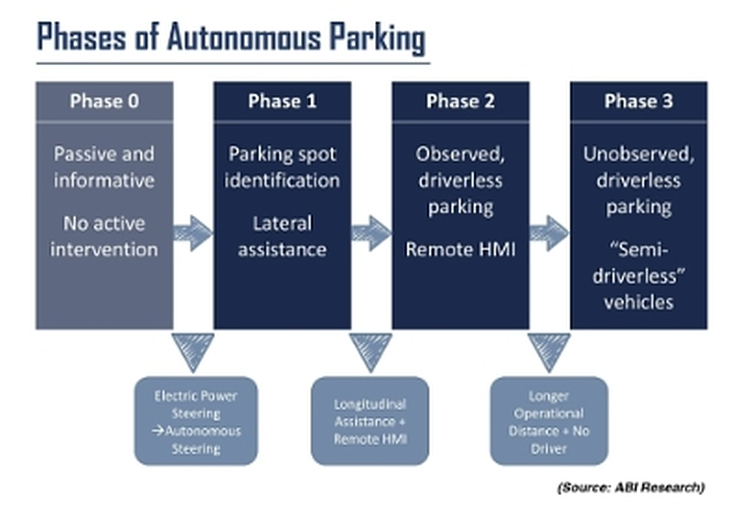 ABI Research identifies three phases of autonomous parking, with each successive stage set to gradually displace the former and all three coexisting to some degree over the next decade. Ultimately, technology will reach a point in which the car parks itself entirely, with no driver assistance or presence within the car required. In Phase 1, the car will provide steering assistance with the driver still inside the vehicle and in control. Phase 2 shows autonomous parking with the driver outside the vehicle but still in control, and Phase 3 introduces autonomous valet parking in which the driver leaves the vehicle at the entrance of a car park. The car then parks itself and waits for the driver to summon it when it's time to leave.

"Passive assistance from ultrasonic sensors and exterior cameras are becoming standard features in most new car models in developed regions," says James Hodgson, Research Analyst at ABI Research. "As more manufacturers turn toward more autonomous parking solutions, OEMs continue to heavily push for consumer education on the systems' safety benefits and added convenience, to convince them of the value of the concept."

The American Automobile Association (AAA) recently published survey results that suggest that 80% of American drivers believe their own parking abilities to be adequate. Only 25% of respondents would trust a self-parking system to replace them in the parking maneuver.

Phase 2 technologies are evident in the January 2016 launch of the Tesla OTA Summon auto park feature, as well as BMW's recent launch of Remote Control Parking on flagship 7 Series in certain regions. While current Phase 2 technologies are limited in ability, as current car systems can only move the car forward and backward at a distance of a few meters and cannot turn the car, it is an important step forward in that it successfully parks the car with the driver removed.

"As the market moves toward the new future of driverless vehicles, parking will remain an important function, but the evolution could bring about big change," concludes Hodgson. "Car parks will theoretically not need to be close to the driver's final destination once cars can park themselves without driver observation or control. This could signify larger social advantages for crowded areas, as inner cities may soon be able to reclaim parking spaces for other purposes. At the same time, the need for parking spaces may ultimately disappear altogether as shared driverless vehicles drop off and pick up customers in a near continuous way."

Tweet
Published in Latest News From Bumper to Bumper Radio
More in this category: « Recall Spotlight: Takata Air Bags Gas Prices Post Largest Weekly Increase in More than a Year »
back to top