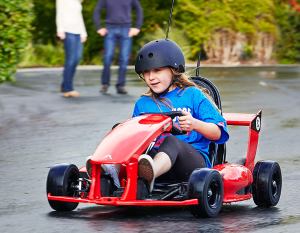 MOUNTAIN VIEW, Calif., Feb. 11, 2016 /PRNewswire/ -- Actev Motors™, creators of smart, electric vehicles for families, today unveiled the Arrow Smart-Kart™, the first smart, electric go-kart for kids. The Arrow, designed by professional racecar drivers and inspired by technology in today's most advanced cars, comes with a sleek design and is packed with performance and safety features. Young drivers are guaranteed an exciting driving experience while parents can supervise on their iOS or Android device through the Arrow app.

"As a long time-car enthusiast, I wanted to leverage my 35 years of technology experience to bring a whole new category of fun and safe vehicles to families," said Dave Bell, CEO and co-founder of Actev Motors. "Simple battery-powered ride-on cars don't excite today's kids – they seek high-tech interactive experiences. The Arrow Smart-Kart gets kids off the couch and outside, and behind the wheel of a real driving machine."

The Arrow Smart-Kart, sized for kids five to nine years old, can be easily configured to match each driver's skill level. Arrow combines the excitement of a real driving experience with the confidence of parental supervision via the Arrow mobile app. The app connects to the Smart-Kart via WiFi and equips parents with several safety features:

With the debut of the Arrow Smart-Kart, Actev Motors enters the toy industry with the goal of transforming the kid's ride-on vehicle market. Based in Silicon Valley, the company is creating fun, safe and affordable children's vehicles by leveraging technology found in today's smartphones and most advanced cars.

The Arrow Smart-Kart, priced at $599.95, is now available to pre-order online and will begin shipping in early summer 2016.

The Arrow Smart-Kart will be unveiled at the Toy Fair in New York City from February 13 – 16, 2016 at Actev Motors' Booth #4615 (located on Level 1 of the Javits Convention Center). Additionally, ride-on demonstrations will be showcased in the lobby of the Crystal Palace (located on level 3). For more information, visit: www.actevmotors.com/press

About Actev Motors
Silicon Valley-based Actev Motors was formed in 2014 with the mission of transforming the recreational and utility vehicle market. Founded by experienced technology leaders and staffed by car enthusiasts, Actev is leveraging technology found in smartphones and high-end cars to create entirely new capabilities. The company's first product is the Arrow Smart-Kart -- a fun, safe and affordable go-kart aimed at five to nine-year-old kids.