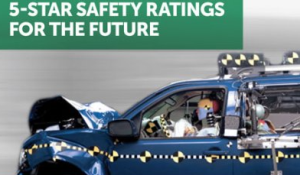 WASHINGTON – The U.S. Department of Transportation today proposed high-tech changes to the National Highway Traffic Safety Administration’s 5-Star Safety Ratings for new vehicles. The planned changes will improve on the well-known safety ratings by adding an additional crash test, using new and more human-like crash test dummies, rating crash-avoidance advanced technologies, and assessing pedestrian protection. These proposed changes will give consumers even better information to help them choose a safe vehicle, and will encourage manufacturers to produce vehicles with better crash protection and new technology innovations that will save lives.

“NHTSA’s 5-Star Safety Ratings have set the bar on safety since it began in 1978, and today we are raising that bar,” said U.S. Transportation Secretary Anthony Foxx. “The changes provide more and better information to new-vehicle shoppers that will help accelerate the technology innovations that saves lives.”

The 5-Star Safety Ratings, also known as the New Car Assessment Program, crash-tests new vehicles every year and currently rates them on how well they protect occupants in frontal, side and rollover crashes. Results from these tests are compiled into a rating of 1 to 5 stars, with more stars indicating a safer car. The vehicle safety ratings appear on window stickers of new cars, and searchable ratings are available on NHTSA’s Safercar.gov website. The current program also includes a checklist of recommended advanced technology features such as rear-visibility cameras, lane departure warning, and forward collision warning.

The planned changes to the 5-Star Safety Ratings system include:

“NHTSA’s 5-Star Safety Ratings program was the first of its kind, and the idea has now spread around the world,” said NHTSA Administrator Mark Rosekind. “Today, we’re adding to that legacy of global safety leadership, ensuring that American consumers have the best possible information about how to protect themselves and their families, and taking a significant step forward in our efforts to save lives and prevent injuries.”

The full proposal, including all planned changes, can be viewed here. The agency will collect public comments for the next 60 days. NHTSA intends to analyze public comments and issue a final decision notice on the planned changes by the end of 2016. Consumers are expected to begin seeing ratings under the new system by Model Year 2019 vehicles. The agency intends to launch an intense consumer awareness effort to help vehicle shoppers understand how the new ratings can guide their new-car buying decisions, as well as briefings for industry and safety stakeholders.

Tweet
Published in Latest News From Bumper to Bumper Radio
More in this category: « Majority of American Drivers on Naughty List How to Prep Your Car for a Holiday Road Trip »
back to top