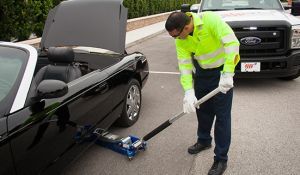 ORLANDO, Fla. (November 11, 2015) –Automakers’ decision to eliminate the spare tire may leave more than 30 million drivers vulnerable at the roadside, according to new research from AAA. Tire inflator kits, a high-cost alternative for consumers, have replaced the spare tire in millions of vehicles over the last 10 model years and, due to their limited functionality, cannot provide even a temporary fix for many common tire-related problems. AAA calls on automakers to put consumer interests first and halt the elimination of the spare tire.

“Flat tires are not a disappearing problem, but spare tires are,” said John Nielsen, AAA’s managing director of Automotive Engineering and Repair. “AAA responds to more than four million calls for flat tire assistance annually and, despite advances in vehicle technology, we have not seen a decline in tire-related calls over the last five years.”

Along with run-flat tires, tire inflator kits have replaced spare tires on 29 million vehicles in the last 10 model years, steadily increasing from five percent of 2006 model year vehicles to more than one-in-three 2015 model year vehicles (36 percent) sold. While each four-pound kit eliminates approximately 30 pounds of weight, resulting in minimal savings in fuel consumption, the replacement cost is high. With some kits costing up to $300 per use, a tire inflator kit can cost consumers up to 10 times more than a simple tire repair and has a shelf life of only four to eight years.

“Automakers are facing increasingly-stringent fuel economy standards and the spare tire has become a casualty in an effort to reduce weight and boost miles-per-gallon,” continued Nielsen. “Advances in automotive engineering allow for weight to be reduced in ways that don’t leave motorists stranded at the roadside.”

AAA tested the most common tire inflator kits in today’s vehicles and found that the units worked well in some scenarios, but they are not a substitute for a spare tire. For an inflator kit to work effectively, a tire must be punctured in the tread surface and the object must remain in the tire. Used correctly, the kit then coats the inner wall of the tire with a sealant and a compressor re-inflates the tire. If the puncture-causing object is no longer in the tire, a sidewall is damaged or a blowout occurs, a tire inflator kit cannot remedy the situation and the vehicle will require a tow.

“Consumers may mistakenly believe that inflator kits are a one-size-fits-all alternative to installing a spare tire,” continued Nielsen. “The reality is these kits can accommodate specific types of tire damage, but having the option to install a spare tire can save stranded drivers time and money.”

Tweet
Published in Latest News From Bumper to Bumper Radio
More in this category: « 2016 Summer of Love Benefiting Phoenix Children's Hospital Overview Be Car Care Aware Before Your Holiday Road Trip »
back to top