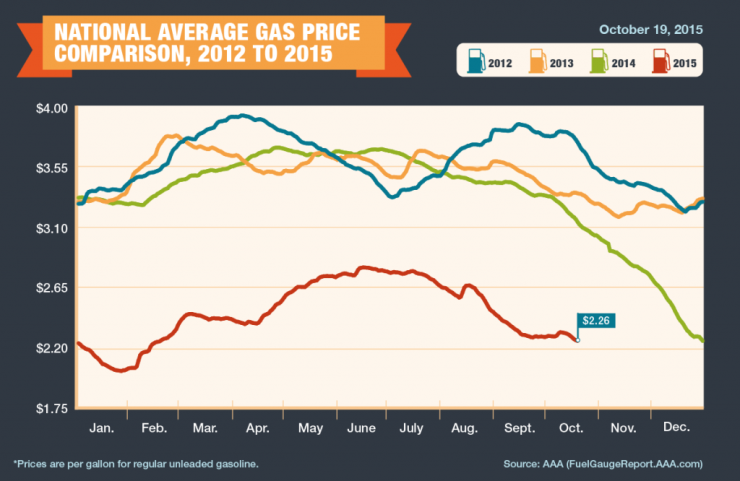 Regional volatility is relatively common at this time of year due to fluctuations in supply and demand, resulting from both planned and unplanned maintenance.  Depending on the severity, these regional fluctuations in price can impact the national average. This year’s autumn refinery maintenance season was expected to be heavier than usual due to refineries operating at higher than normal rates in order to meet demand from the busy summer driving season. However, ample domestic supply kept a ceiling on pump prices in addition to helping to keep the national average relatively steady since September 15. This factor has also been a contributing factor to prices moving lower over the past several days. Barring any unanticipated disruptions in supply, and/or spikes in the price of crude oil, the national average could fall below the $2 per gallon threshold for the first time since 2009 before the end of year.

Motorists in South Carolina ($1.94) and New Jersey ($1.97) are paying the nation’s lowest prices at the pump, and a total of five states are posting retail averages below $2 per gallon. States west of the Rockies continue to post the highest averages at the pump, however, for the third consecutive week drivers in every state are paying averages below $3 per gallon. Hawaii ($2.90) unseated California ($2.88) as the nation’s most expensive market for retail gasoline and the two market leaders are joined by regional neighbors Nevada ($2.82), Alaska ($2.63) and Utah ($2.51) as the top five most expensive markets.

Regional volatility appears to be easing, and with the exception of Hawaii (+2 cents), motorists nationwide are experiencing savings at the pump week-over-week. Pump prices have fallen by double-digit increments in nine states over this same period and averages are down by a nickel or more per gallon in a total of 17 states. The largest weekly savings are seen in the Midwestern states of Indiana (-19 cents), Ohio (-17 cents) and Michigan   (-13 cents), likely a welcome change compared to previous weeks where prices moved higher in a similar fashion.

Monthly price comparisons continue to reflect some volatility with pump prices moving by double-digits at both ends of the spectrum. Drivers in 33 states and Washington, D.C. have seen prices move lower month-over-month, and pump prices in the majority of these states (15) are discounted by a dime or more per gallon. Consumers in Alaska (-53 cents), Idaho (-29 cents) and Colorado (-27 cents) are saving the most per gallon to refuel their vehicles and prices in all three states are down by a quarter or more per gallon month-over-month. On the other end of the spectrum, drivers in 17 states are paying monthly premiums – although averages have moved upward in a less dramatic fashion. Pump prices have moved higher by  nickel or more per gallon in seven states over this same period, and motorists in a total of three states have seen prices move higher by double-digit increments: Minnesota (+13 cents), Oklahoma (+11 cents) and Iowa (+11 cents).

Year-over-year discounts in the price of retail gasoline continue, and drivers nationwide are experiencing savings at the pump. Retail averages are discounted by $1 or more in nine states, led by: Alaska (-$1.19),

A number of factors have the potential to shift the global price of crude oil in the weeks ahead. The Iranian nuclear deal is once again front-of-mind, as global negotiators continue to move forward, which could bring Iranian oil back to the market in as little as two months. China’s economic growth rate fell below seven percent for the first time since 2009, putting a damper on speculations that demand from this country could offset some of the market’s oversupply.

Like the global market, the domestic oil market is also characterized by oversupply and the most recent reports from the U.S. EIA show a recent build in crude oil. Refinery maintenance is ongoing, making it likely that total domestic inventories of crude oil could hit another record-high, keeping the market oversupplied. WTI opened the week falling below the mid-$40 per barrel range, despite closing the week up 88 cents and settling at $47.26 per barrel.

Tweet
Published in Latest News From Bumper to Bumper Radio
More in this category: « Roadside Breakdowns Preventable with Proper Maintenance NHTSA Encourages Parents of Teens to Join The '5 to Drive' Campaign »
back to top