Name My Car? Younger and Female Car Owners Most Likely to Name Their Vehicles

DAYTONA BEACH, Fla., Jan. 13, 2014  -- Women and younger car owners are the most likely to give a nickname and associate a gender to their vehicles, according to a new report from DMEautomotive. The survey on car-naming behavior investigates the depth of the emotional connection between consumers and their cars as represented by the degree to which they personify and ascribe a gender to their vehicles. The survey was fielded among approximately 2,000 consumers in 2013, and also revealed that one in five car owners nickname their vehicles.

Recommended Safety Items You Should Always Have in Your Car's Trunk 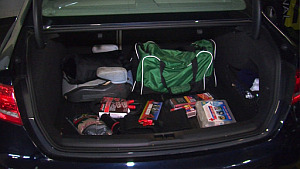 Bloomington, Ill., January 13, 2014 — Nearly all drivers could improve what is in their trunk to be better prepared for roadside emergencies. A new survey by State Farm and KRC Research shows two-thirds of drivers (67 percent) had some sort of “junk” in their trunk ranging from car detailing equipment to toys and used food or drink containers. Additionally, drivers shared a variety of strange “junk” items in their trunk including an old gorilla costume to an inflatable sheep to a wedding dress. Getting rid of the “junk” (non-emergency supplies) and adding the right supplies will help people deal with the unexpected and get back on the road.

Study Reveals Singing Out Loud is Top Activity While Driving

DAYTONA BEACH, Fla., March 18, 2014 -- Singing out loud is the number one activity while driving, according to a consumer survey from DMEautomotive released in conjunction with National Collision Awareness month. And more dangerous distracted driving activities such as sending/receiving a text, talking on the phone, and eating, rank in the top five activities performed while driving.

While singing out loud doesn't make distraction.gov's list of distracted driving activities, the rest in the top five do. This is sobering given that in 2012 alone, 3,328 people were killed in distracted-driving crashes.[1] And, according to the DMEa survey, younger drivers are much more likely to be multi-tasking while driving: roughly 9 in 10 admit to engaging in other activities while driving – and they are significantly more likely to be doing every single distracted driving behavior measured in the survey from texting, eating, talking on phone, using email, watching TV, working on laptop, changing clothes and putting on makeup.